Venture of a Lifetime, Part 1 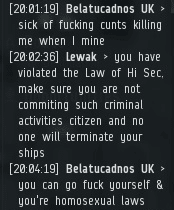 Belatucadnos UK hated being ganked, but not enough to change his evil ways. 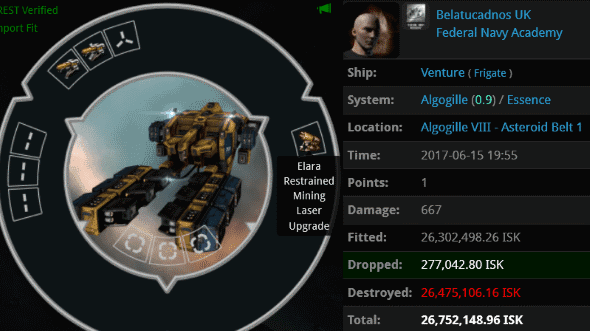 In the exotic Essence region, our Agents patrolled the asteroid belts for unlicensed Ventures. Belatucadnos didn't buy a permit or even fully fit his ship, but he saw no problem in spending 26 million isk on a yield module. Nor did he learn much from being ganked: He lost a Venture with the exact same fit the day before--in the same system! 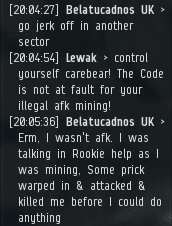 Belatucadnos pretended to be innocent. "I wasn't AFK, I was just..." He claimed that he wanted rookie help, but he showed disrespect to the Agent who was offering him true rookie help. 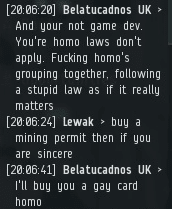 The miner condemned the phenomenon of "fucking homo's grouping together, following a stupid law as if it really matters." Otherwise known as civilization. 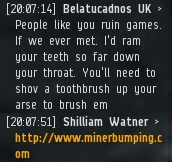 Belatucadnos raged at the brave men and women who enforced the Code, predicting a violent end for any Agent who met him. So far, though, every time he met an Agent, he lost a Venture. 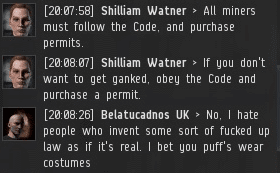 Agent Shilliam Watner joined the conversation. It was he who had ganked Belatucadnos the day before. Shilliam was disappointed to observe the miner's lack of progress. 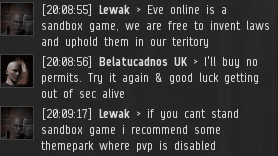 Clearly, the EVE tutorial had failed this miner. Agent Lewak made a vow: No one would be able to say he had failed the miner. 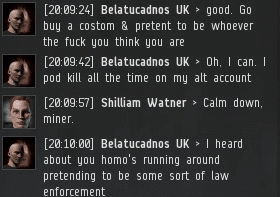 Belatucadnos ditched the "innocent new player" routine and picked up the "powerful combat alt" routine. His alt won PvP battles all the time. Unfortunately, he was unable to produce his alt's name. 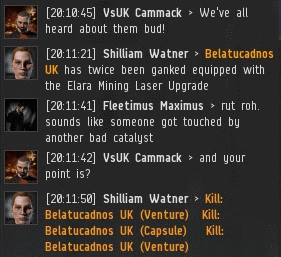 Agent Shilliam put the whole system on notice, informing everyone in local that Belatucadnos was a repeat offender. 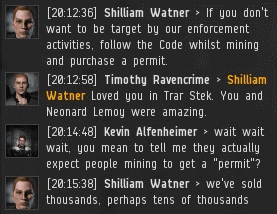 Our Agents provided the system with an opportunity to talk about the only subject that anyone in highsec really gets invested in: the New Order and its Code. 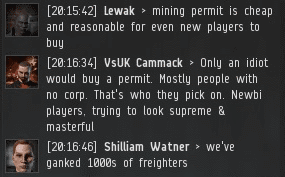 VsUK Cammack joined the fray. Shilliam strongly suspected the pro-carebear individual to be the alt of Belatucadnos. 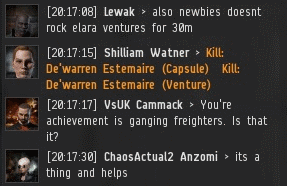 The highsec population is divided into pro- and anti-Code factions. Over the years, the pro-Code faction has been growing stronger. People realize that we're on the right side of history. 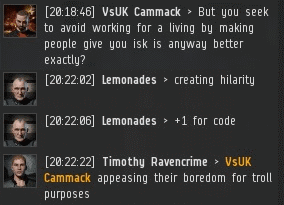 The battle was joined. Would the hearts and minds of the Algogille system be won by the Code, or did the residents need to be repeatedly ganked before that happened?