Venture of a Lifetime, Part 3

Previously, on MinerBumping... Agents Lewak and Shilliam Watner struck a decisive blow against the out-of-control Venture pilots of the Algogille system. Instead of congratulating our heroes on their elite PvP, some of the miners proved to be bitter losers. One of these, VsUK Cammack, took the opportunity to question the legitimacy of the Code.

Lewak defeated the miner in verbal PvP over and over. But VsUK wouldn't give up. 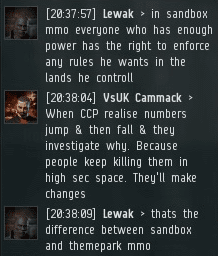 When VsUK finally showed signs of realizing he wouldn't be able to persuade our Agent to forsake the Code, he consoled himself with fantasies of CCP banning ganking to boost subscription levels. Carebears have been saying that for so many years--yet the mighty CODE. alliance keeps winning.

Miners often claim that they should be allowed to mine AFK without interference because EVE is a "sandbox" where you can do whatever you want. VsUK tried out a different strategy: He denied that EVE is a sandbox game at all. 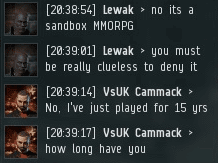 Apparently this highsec Venture pilot has been playing EVE since the beta. Or to put it in modern terms, he's a "new player". 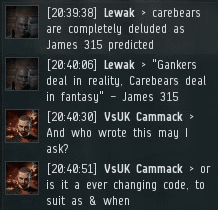 Agent Lewak took pity on VsUK. The carebear's madness was shocking, but Lewak had prepared himself for this sort of thing. He'd read MinerBumping, and he knew the words of the Saviour well. 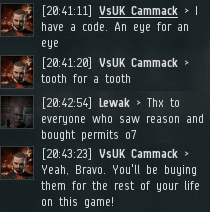 Though the miners may fill local chat with their delusions, they cannot stop the New Order from performing its vital work. Even as a carebear decries the Code in local, other miners in the same system buy mining permits. 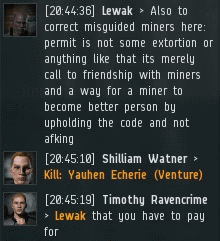 The ganks went on, as they must. Agents Lewak and Shilliam took turns ganking during each others' GCC timers. 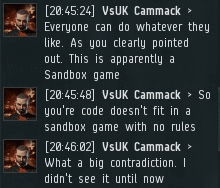 VsUK suddenly realized the mistake he'd made earlier with his "sandbox" argument, so he revised it into the more traditional carebear fallacy. Oops! It was too late, though. 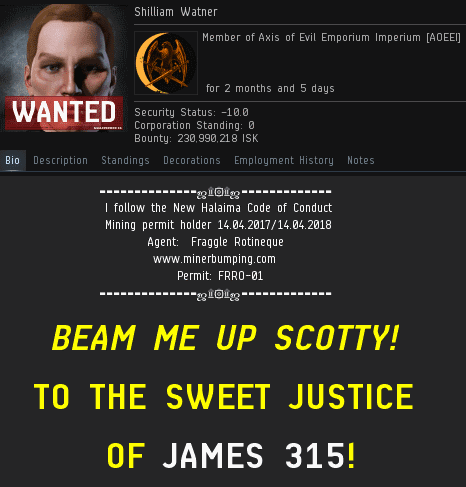 Agent Shilliam had been quiet, but busy. Shilliam allowed Lewak to speak the truth in local while he ganked in the background. To paraphrase the carebears, "As long as you're crying to me, you're not crying to any other Agent." 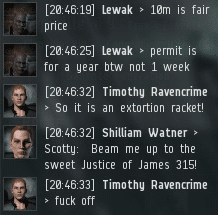 Opening the crowd with his classic catch-phrase, Agent Shilliam was now ready to announce his victories over the Venture pilots of Algogille: 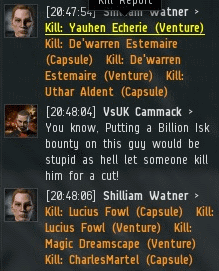 Carebears might deny the existence of the Code, but there was no denying the killmails. The Code was alive and well in Algogille. 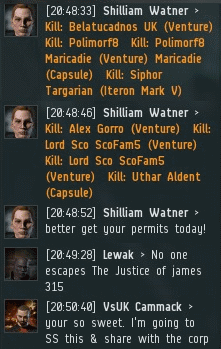 Faced with the enormity of Shilliam's success, the rebels shuddered. Would this inspire the resistance to come up with a way to defeat our Agents and reclaim Algogille for the forces of bot-aspirancy?