One thing about highsec miners: They keep up on current events, apparently for the purpose of gathering material for more misguided comparisons. 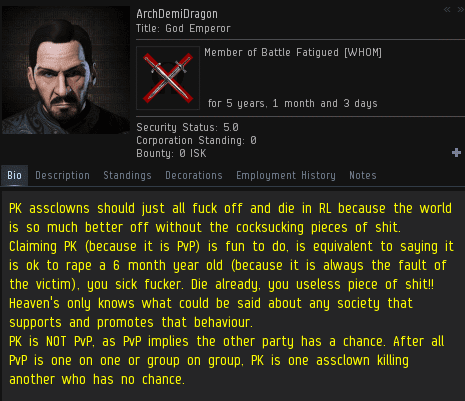 ...In case you were wondering what sort of fellow ArchDemiDragon is.

Ah, the old "I was holding it for a friend" excuse. True friends don't put their buddies in such compromising positions. They don't lie to our Agents, either.

StaticRain31 Rainz threatened to use his ISD alt to permaban our Agent for ganking him. The ban never came. I suppose he allowed his ISD account subscription to lapse.

Adalanta Prince wanted Jack Van Impe to feel bad about ganking her, so she deployed the most persuasive language at her disposal. But Adalanta's honeyed words had no effect on our Agent.

Gosh, wouldn't it be a shame if this game lost Adalanta?

Adalanta certainly had no love for the New Order--but she didn't show much more loyalty to her own corp. As any good CEO in EVE will tell you, the best corp members are the ones who obey the Code.

No permit, no ship.

I believe I received this EVEmail by mistake. I'll make sure CCP HQ gets it. 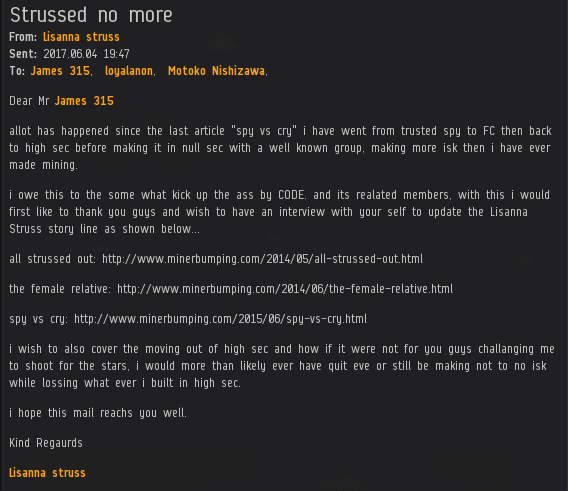 Lisanna struss' history with bot-aspirancy goes back a long way; he is best known for his appearance in the famous "The Female Relative" post from 2014. It may take years, but everyone who stays in EVE eventually learns to appreciate the Code.