Death wishes mixed with concerns about CCP's subscription numbers? Must be time for another edition of the Highsec Miner Grab Bag!

We get this question a lot. Perhaps it could be addressed in the official EVE tutorial?

After tens of thousands of ganks, Agent Aaaarrgg finally ganked the wrong guy. Oh well, it was fun while it lasted. 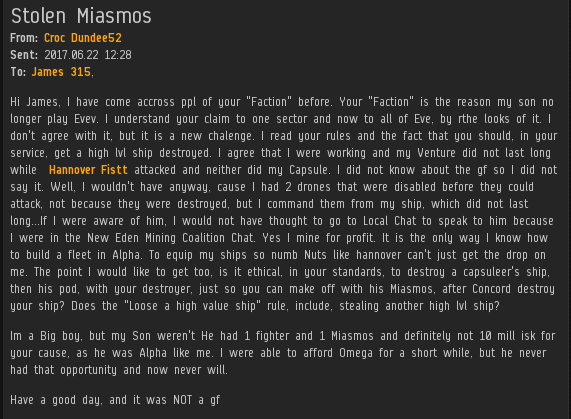 If you read between the lines, this guy's too cheap to let his son have an omega account. No surprise there--he was also to cheap to buy him a mining permit.

atturra so matter-of-factly recommended that our Agent heat up the Red Pen so its ink would spill. Why would our Agent want the ink to spill, though?

Okay, but writing something in an "added contact" notification isn't the best way to reach me.

You can tell our Agent was able to get through to this guy on some level. Otherwise he wouldn't have felt the need to say he wasn't just a miner.

So I was actually contemplating trying out Eve to see what it was like. Then I found your website by accident.. http://www.minerbumping.com/p/the-code.html You are a terrible person. You made a faction just to grief and gank, just because nobody will stand up to you. You are a fascist AND YOU are a bully and eve should shut you down. As for me, Eve has lost any chance of me paying money to play their game and risk having a run-in with you and your group of fascist griefers. I hope you are happy that your foolishness has run off yet another prospective player. I have also forwarded this to friends of mine who recently mentioned Eve. They also will not play the game because of idiots like you. I also took the liberty to cc this to the Eve admins so they can read this just as you do.

Maybe you will change your ways, but by the extreme fascism you created on your website, i doubt you will. You probably think you are Role playing, but you aren't. You are a griefer, the most annoying type of person in gaming. As a game admin myself, I have banned many trolls like yourself. I hope you get what you deserve.

Do you really value your customer and your income? Or do you value identity politics of trolls like this minerbumping fascist? If you value your customers overall then you will shut this little marxist/neo-fascist troll down before he ruins your game completely. If you value trolls and griefers, then so be it. I will never support your product and I will help my gaming buddies by encouraging them to not support your product either.

Sincerely,
Concerned gamer of over a decade in online communities. Admin of 2 game servers, 2 TeamSpeaks, Youtuber and in general a person who has a following of like minded gamers.

I only rarely get tears mailed to my out-of-game email address. I took this email very seriously, as it came from an admin and Youtuber who apparently has quite a following. Unfortunately, he didn't leave his name, so we have no way to fully appreciate how prominent a figure this gentleman must be.

4XTC Erquilenne was behaving like a Goofus, so Agent Lawrence Lawton urged him to adjust his attitude. He did:

Don't be fooled, dear reader. 4XTC was probably just laying the groundwork for a future post-gank message: "I wasn't AFK, I was just visiting my step-daughter..."

You can usually tell when someone is going to buy a mining permit, and when they're not... 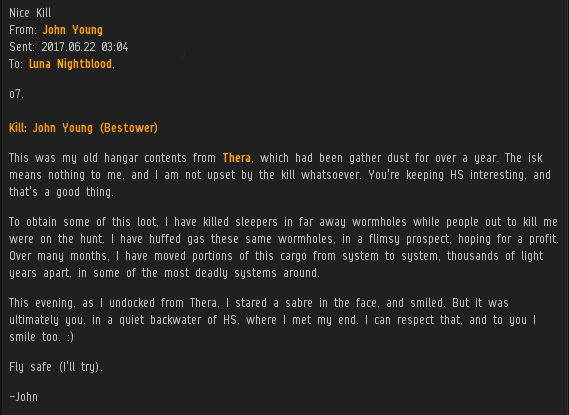 More and more, the residents of lowsec, nullsec, and wormhole space are beginning to realize that highsec is the home of elite PvP.
Posted by MinerBumping at 17:18