"Nobody warned me about the Code," says the carebear. In fact, the carebears hear about little else. Our Agents are EVE celebrities, hailed by the locals in every system. 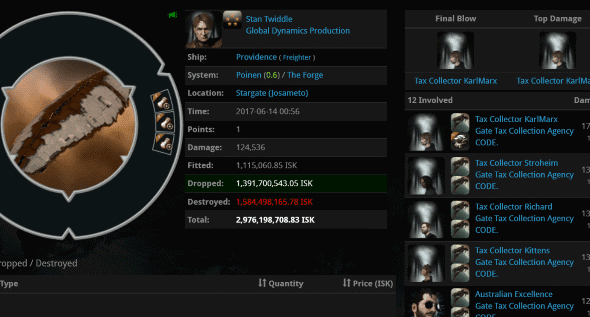 Stan Twiddle tried to get our Agents to stop PvP'ing him, but they were having too much fun. The result was a terrific explosion and the loss of Stan's 3 billion isk freighter.

Australian Excellence and his colleagues from the Gate Tax Collection Agency assembled a lot of firepower and pulled off an impressive gank. Stan was too poor a sport to congratulate them on their achievement, though.

Thanks to the mighty CODE. alliance, Poinen local was buzzing with excitement. A random local advised Stan not to "feed the trolls". Stan could only hold his tongue for a few minutes. Then he shed some tears and left the system.

Australian asked the question that everyone was thinking: Where was Anti-Ganking during that gank? Highsec Militia ten-star super-admiral Thomas en Chasteaux confirmed that all AG personnel were already assigned to the task of non-stop failing daily. Therefore there was no one available to try to stop the gank.

Another carebear spoke up. Kor stavik didn't feel the need to hide behind any pretense: He immediately admitted that he'd been ganked by CODE. before. It was true; he'd recently lost a poorly tanked Mackinaw.

Poinen local had been dead before our Agents arrived. No longer. It hosted a group therapy session for all of the New Order's "victims". But at least local wasn't silent anymore.

Kor was interrupted by another "don't feed the trolls" request in local chat. Would it work this time?

Kor's tears were far too important. His rant took priority over the need to deprive our Agents of salt.

In fact, people have been saying for many years that the New Order would be defeated if only everyone stopped talking about us. "Don't give them content," urge the rebels. But this is like trying to achieve world peace by telling people to stop fighting.

Kor was spreading poisonous lies in local, so Australian took the opportunity to clear up some misconceptions about the New Order. Poinen deserved the truth.

Our Agents' humility is pretty darned legendary. (They learned it from me.)

Kor groaned about the burden of being a new player in CODE. territory. I'll save you the trouble of looking him up, dear reader: He's been playing EVE for over 5 years.

The carebear tried to passive-aggressively curse our Agent. Australian only needed a few seconds to think about how to reply:

The miner decided to take some time off from playing EVE, which was probably for the best. Kor's impromptu vacation was a good opportunity to catch up on his reading. If you're an EVE player, the Code should be at the top of your summer reading list. Or winter reading list, if you're in Australia.
Posted by MinerBumping at 18:18