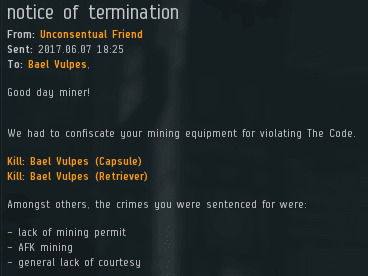 When miners like Bael Vulpes lose a fail-fit mining ship, they're generally sent an informative EVEmail. But they get more than an EVEmail: They get a choice. 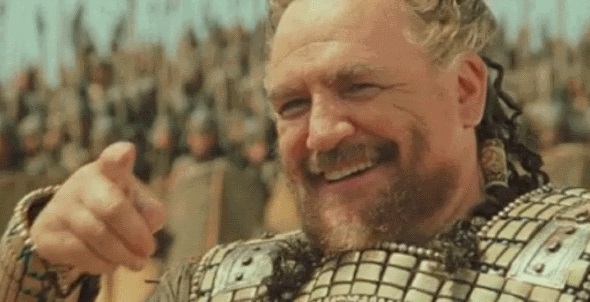 Bael chose not to buy a permit and embark on an exciting journey of Code compliance. His ego was too big for that. And that meant the miner was setting himself up for another fall.

Agent Unconsentual Friend again extended the miner an invitation to a better life. Would Bael accept the gracious invitation, or would he make an even bigger fool of himself?

Ah, poor miner. Though highsec Retriever pilots should show humility, Bael felt compelled to puff himself up. He spun a story about somehow profiting a billion isk from an alleged CODE. heist. It's not clear exactly how Bael was supposed to have made money off of the theft, but it had something to do with CODE. "front companies" buying stuff from him.

Bael's humiliation came swiftly. Several months after the Ruse Kruise, highsec miners are still falling for it. One can only imagine how the world-beating Retriever pilot must've felt in this moment. Time for Bael to give up the act.

Miners are good at digging themselves into a hole. Bael denied that the Ruse Kruise was a prank, insisting that "market guys" had made money off of the theft. Presumably Bael was one of those market guys. A minute later, however, Bael reconsidered and sent another EVEmail:

Doubts were beginning to creep into Bael's mind. He was no longer sure exactly what had happened, but he still believed that he'd somehow been hooked up with cheap ships that he re-sold to CODE. front companies at an outrageous profit.

Bael's story was a little vague and growing fuzzier by the minute, so Agent Unconsentual requested clarification.

The miner concluded the exchange by changing the subject, referring to some kind of CODE. "rebranding". Sadly, Bael wasn't in the mood to elaborate any further.

The Ruse Kruise is the gift that keeps on giving. Even as recently as this week, people are still passing the story around. 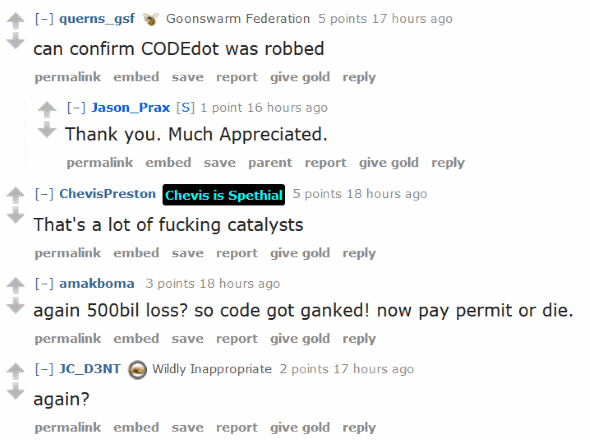 This phenomenon can only be partly explained by the silliness and gullibility of Goofuses who still yearn for a victory against the New Order. The other part of the equation is the extraordinary relevance of the mighty CODE. alliance. We're what's happening in EVE, so we're what EVE players talk about. A word of caution, though: If you want to speak about EVE without looking foolish, remember that the CODE always wins. Always!
Posted by MinerBumping at 19:10