A Meeting with Upper Management

For many years, carebear conspiracy theorists have spread wild rumors about the Code being part of some plot by the Goonswarm Federation. Although the rumors are false, many individual Goons serve as Agents of the New Order. Our organization transcends corps, alliances, and coalitions. 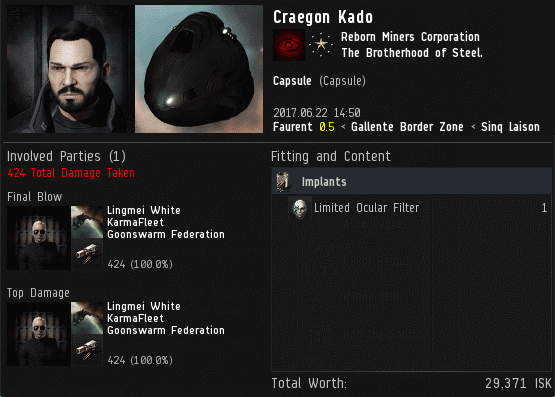 Agent Lingmei White explored highsec in search of a target he could kill using a simple gank Atron. Craegon Kado, an unlicensed Venture pilot, fit the bill. The miner was ganked and podded.

Craegon belonged to the "you didn't warn me!" school, which is pretty common. What followed was less typical: Lingmei was given an invite to Craegon's corporation's public channel. Lingmei accepted the invitation.

When Lingmei joined, he saw that there was a conversation already in progress. Craegon was speaking to one of his superiors, Raveth Paaltomo. Craegon must've been a low-ranking member of the corp: He mistakenly referred to his pod as a "shuttle".

Lingmei politely interrupted the conversation to introduce himself. Now what?

The CEO of the corporation, Geofrey Nyssen, was in charge of the meeting. He demanded to know why Lingmei killed one of his miners. What a great opportunity to talk about the Code!

Uh oh. So much for getting off on the right foot. 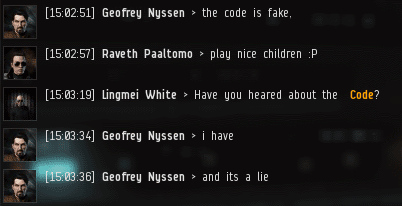 By the time Lingmei grabbed a link to the Code, he saw he'd already been preempted by the CEO's anti-Code comments. Geofrey was a skeptic.

Geofrey had done a poor job of educating his corp members. Though he was familiar with the Code himself, he apparently hadn't bothered to tell Raveth or Craegon about it. Which is probably just as well, since Geofrey's mind had been ravaged by anti-Code propaganda.

Nevertheless, the meeting was a productive one. Lingmei secured a confession from Craegon, and fellow miner Raveth chastised his corpmate.

Geofrey tried to persuade Lingmei to abandon his support of the Code. No such luck. People convert to the Code, but never from it. (And if they do, it means they never truly embraced the Code to begin with.)

The CEO grew increasingly angry with each moment he dwelled upon the matter. Our Agent barely had a chance to speak before Geofrey threatened to take action against the New Order.

All the evidence pointed in favor of killing Craegon's Venture, but Geofrey didn't care. Protip: A good CEO doesn't blindly take sides; he considers the evidence objectively and, if necessary, takes action against his own corp members. Also, a CEO shouldn't question the authority of our Agents.

Now Lingmei was in trouble. Geofrey threatened to retaliate by bringing in powerful friends with capital ships. But Lingmei chose not to contact his own friends in Goonswarm. He didn't need their help--he had the Code on his side.

Diplomatic contact was terminated when the mining corp's CEO kicked Lingmei from the channel. Our Agent wasn't discouraged. He knew that not all disputes can be resolved peacefully. For justice to prevail in highsec, many carebears must die.
Posted by MinerBumping at 18:08