The Code isn't merely an alliance--it's a revolution. 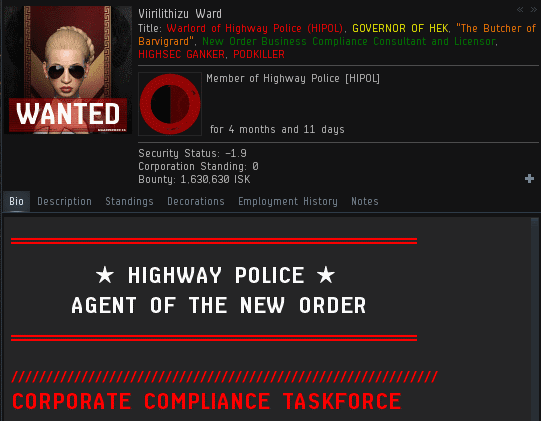 Over the past few years, the number of Code enforcement organizations has proliferated. Though many Agents belong to the mighty CODE. alliance, numerous independent groups enforce the Code in a wide variety of ways. Considering the broad base of our movement and the extraordinary diversity of our Agents and their activities, it's amazing that we've been able to keep everything so perfectly coordinated.

Agent Viirilithizu Ward was on patrol on the Hek region when she came across a suspicious group called Black Rose Fleet Systems. Upon her initial inspection, she learned that the corp's members lacked mining permits. A declaration of war immediately followed. The corp's CEO, StarterrorPrime, refused to make peace.

StarterrorPrime seemed willing to negotiate a business arrangement, but only if he didn't need to buy a "ridiculous" mining permit. He claimed that our Agents don't honour the permits--a vicious rumor that could only have come from the CEO's illicit contacts with rebels.

StarterrorPrime sent a follow-up EVEmail denying that he'd violated the Code. He also outlined his vision: The CEO intended to restore Hek's position as a major trade hub in highsec. Clearly our Agent was dealing with a high roller.

With just hours to go before Viirilithizu's wardec went live, StarterrorPrime contacted CODE. member Alt 00. Perhaps he thought this was a way of going over Viirilithizu's head.

The CEO was interested in doing business with CODE. as part of his overall plan to take over the Hek market. However, he feared that buying a 10 million isk mining permit would cut too deeply into his profits.

Originally sparked by Viirilithizu's wardec, this situation was quickly becoming a high-level diplomatic matter. Maybe StarterrorPrime could take a crisis and turn it into an opportunity. What a businessman.

As with all major alliances in EVE, CODE. has its official diplomatic contacts listed in its in-game description: 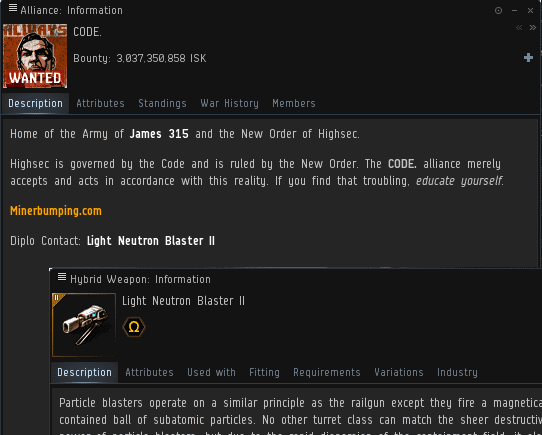 But CODE. is different from other alliances.

Unable to establish contact with Light Neutron Blaster II, StarterrorPrime had no choice but to try working out a deal with Alt 00.

As the hours counted down to Viirilithizu's war, StarterrorPrime remained cool as a cucumber. He had every intention of negotiating the best possible deal for his corporation. The future of the Hek market and StarterrorPrime's empire were at stake.