Over One Trillion Two Hundred Six Billion in Shares Sold 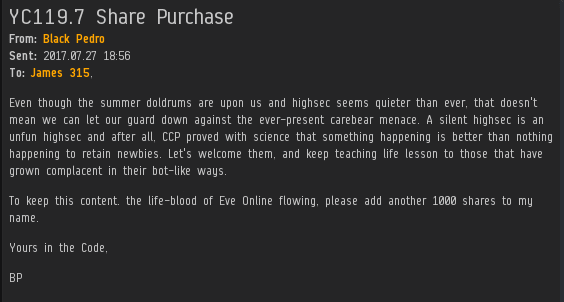 Pow! There it is.

Black Pedro kept the spirit of EVE alive with his purchase of an additional 1,000 shares. Said purchase sent us past the 1,205 billion isk mark, but more importantly, it was made with pure intentions. That's the real reason Black Pedro earned a Supreme Protector's Tip of the Hat™.

Another milestone reached: zyk0 purchased his first 1,000 shares, thereby sending us past the 1,206 billion isk mark. But zyk0 didn't earn a Supreme Protector's Tip of the Hat™.

Are you awake and fully alert, dear reader? These posts don't contain boilerplate, no matter how often we pass a billion isk mark. If you weren't paying close attention, reread the previous paragraph, because something unprecedented occurred here.

At the very moment I was processing new share purchases, I saw an unusual event unfolding live in MinerBumping chat. 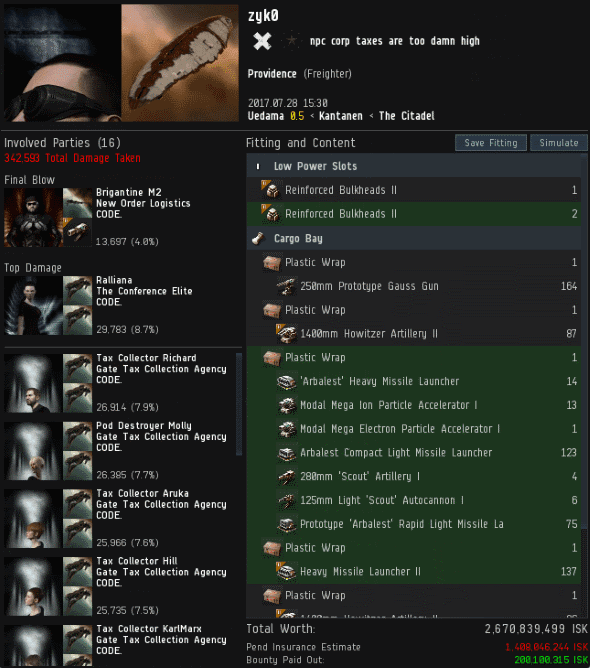 A freighter belonging to zyk0 had just been destroyed! Controversy ensued.

zyk0 was a new shareholder. I mean, he was really new--brand ganking new.

I had a hunch about what was going on. Agents of the New Order, always trust your hunches. They're practically facts.

zyk0 immediately confessed that his purchase of 1,000 shares occurred after his freighter started getting bumped. 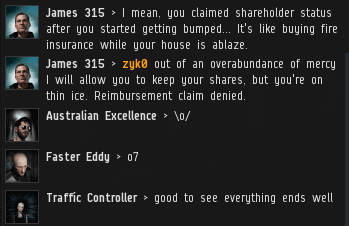 As always, perfect justice prevailed. Everyone walked away happy. zyk0 was allowed to keep his shares, but he didn't get a Supreme Protector's Tip of the Hat™ due to the circumstances surrounding the purchase. 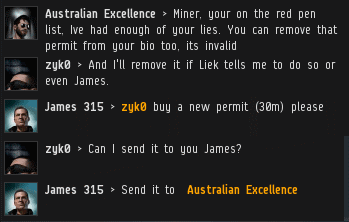 In a world where the powerful are so often marked by corruption and incompetence, it's nice to see a regime where everything goes the way it's supposed to. Simply put, the Code works.
Posted by MinerBumping at 18:22