Venture of a Lifetime, Part 5

Previously, on MinerBumping... All Agent Shilliam Watner wanted to do was to restore peace to the Algogille system. But a vengeful miner named VsUK Cammack, who claimed to be a 15-year veteran of EVE, threatened to undermine the legitimacy of the Code and raise a full-scale rebellion against the New Order. 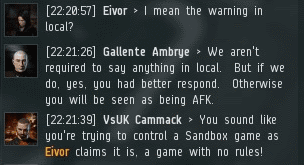 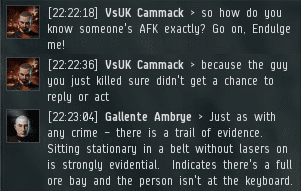 VsUK resumed his interrogation of the pro-Code forces in local. He demanded to know how our Agents can tell if a miner is AFK. Of course, it is the obligation of the miner to prove that he's not AFK. (Which is an easy task, if you're actually at your keyboard.) 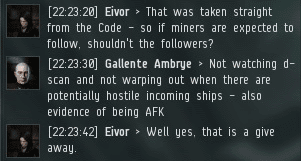 Eivor was a little skeptical at first, but she had to admit that if a miner waits around to be ganked, he's probably breaking the Code. 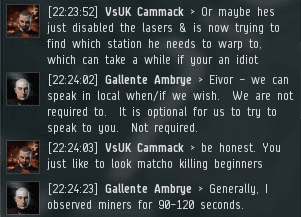 Despite Gallente Ambrye's admirable efforts to educate the miner, VsUK only grew more bitter with time. 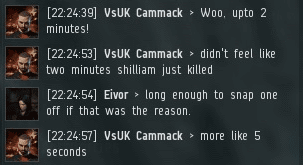 Agent Shilliam kept quiet in local, but his deadly effectiveness was well known to the Algogille system. 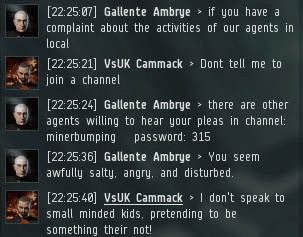 VsUK was increasingly frustrated with the situation. He'd hoped to rally support to his cause, but looked for allies in vain. Now came the critical moment: He would either abandon his childish resistance to the Code--or he would choose the Goofus option. 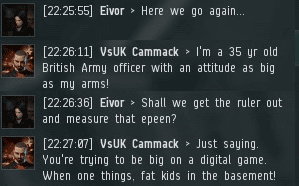 The Goofus option 'twould be. 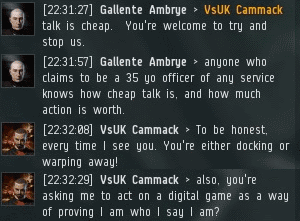 It's not uncommon for miners to claim to have served in the military. Whether or not the claim was true in this case, VsUK struggled to gain support in Algogille. In fact, the more he spoke, the more miners he tended to alienate. 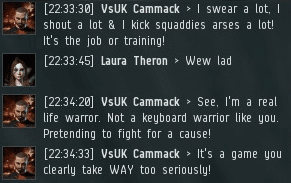 Though he was a failure as a PvP'er in EVE, VsUK tried to bolster his record by appealing to unverifiable claims of real-life PvP. Unsurprisingly, this strategy backfired. 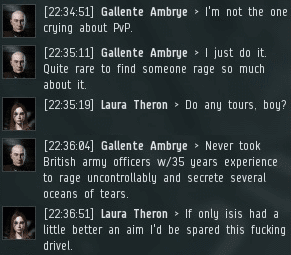 Random onlooker Laura Theron, who might have otherwise been sympathetic to VsUK's cause, made no secret of the fact that she was quite tired of him. 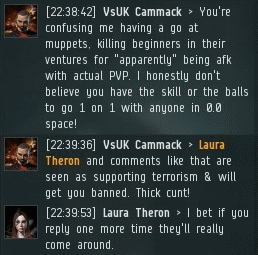 As is so frequently the case, VsUK's attempt to organize an anti-Code resistance only resulted in stirring up conflict among his fellow miners. 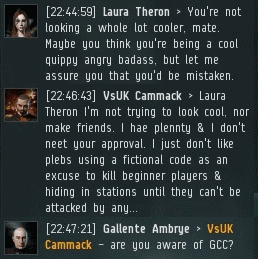 VsUK was soon entirely preoccupied in putting out the fires he'd started. 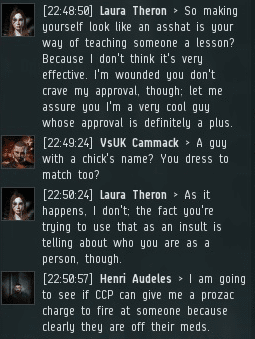 The rebel miner was fully engaged on this new front of his own creation. Our Agents continued to enforce the Code with impunity. 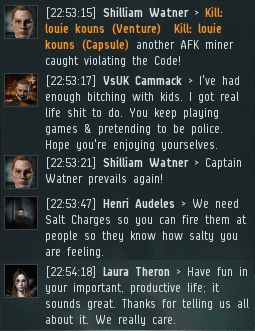 With Agent Shilliam's latest victory, VsUK knew he was beaten. The alleged military hero retired from the field of battle. Another triumph for the New Order!
Posted by MinerBumping at 18:18