Over One Trillion Two Hundred Four Billion in Shares Sold

A potentially timely reminder to all you permit owners out there: Don't forget to renew it each year! And while you've got your wallets open...

...Get yourself some New Order shares, too.

Zoe Worclaw already owned a bunch of shares, but her purchase of an additional 3,100 shares greatly increased her holdings and sent us past the 1,202, 1,203, and 1,204 billion isk marks. Zoe earned a Triple Supreme Protector's Tip of the Hat™ as a reward.

Side note: I typically don't update those little character portraits you see when someone buys shares or gets on the month's Top Supporters list. Some people still have their portrait from 2012 on the Shareholders list, despite changing it multiple times over the years. But if you buy a bunch of shares and request an update on your portrait--hey, why not? EVE is all about microtransactions right now, isn't it?

Shalea De'Vila creates content in the form of contests and treasure hunts and the like, which are posted on the Facebook EVE group. Naturally, this resulted: 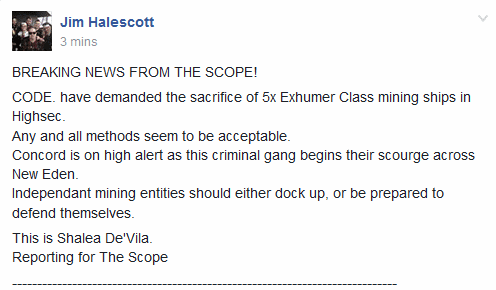 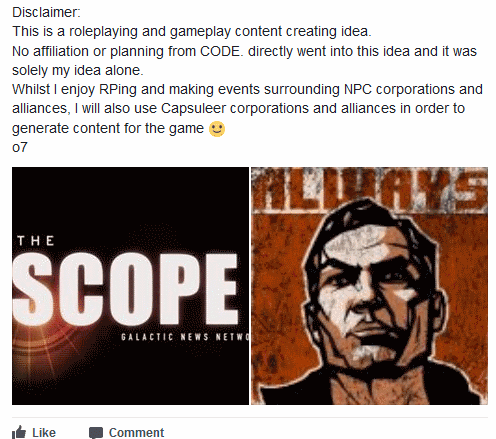 It makes sense that players would create EVE lore based around the mighty CODE. alliance. We have far more impact on highsec than all those NPC entities CCP came up with--and we're a lot more interesting, too.
Posted by MinerBumping at 16:01