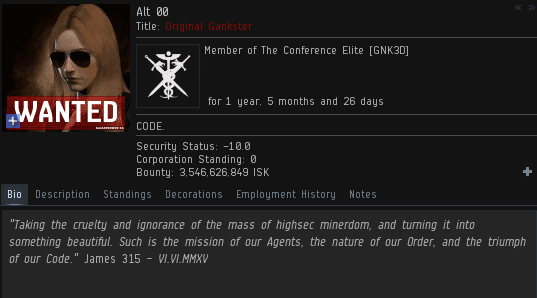 If you're going to be famous for something, you may as well be famous for doing something good. That's our Agents' motto, and they certainly live up to it. 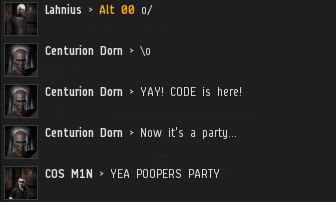 Centurion held a grudge against Alt 00, to the point where her mere presence in local was enough to set him off. He claimed it was Alt 00's fault. 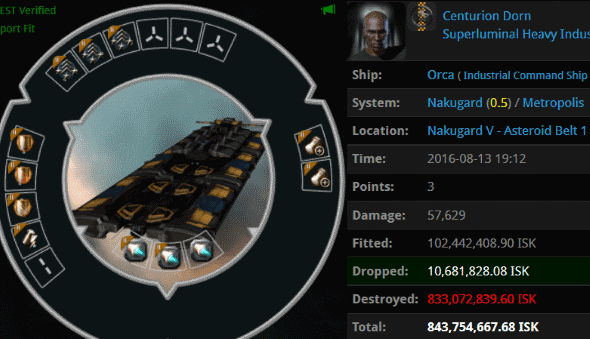 Nearly a year ago, Alt 00 and some of her friends from the mighty CODE. alliance ganked Centurion's Orca. Admittedly, the Orca was fail-fit; it didn't even have a permit! But Centurion never got over it.

Our Agent recognized at once that it would be a challenge to sell a mining permit to Centurion Dorn. Luckily, she had a number of MinerBumping quotes on hand, ready to be deployed at a moment's notice.

The miner accused Alt 00 of seeking hatred and negative attention. Apparently he was able to get all that from "settle down" and "let's be friends". 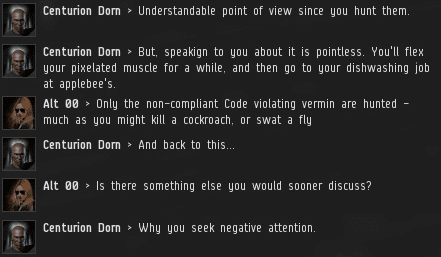 Highsec mining takes a toll--especially over extended periods of time. Centurion has been playing EVE for nearly 10 years. He's still mining, and it shows whenever he tries to have a conversation with someone.

Rebellious miners compare our Agents to all sorts of people. Usually they reference serial killers and genocidal dictators. Comparisons to musicians are less common.

Centurion cursed the game mechanics that give suicide gankers such an edge. He demanded that Alt 00 undock her -10 sec status character and engage him in a fair fight.

Alt 00 wanted to help Centurion Dorn stop being a Goofus. Needless to say, she had her work cut out for her.