Venture of a Lifetime, Part 4

Previously, on MinerBumping... The Algogille system received the unexpected pleasure of a visit from Agents Lewak and Shilliam Watner, who slaughtered a bunch of Ventures there. The alt of one of the Venture pilots, VsUK Cammack, squawked up a storm. But try as he might, he couldn't out-argue our Agents--or stop them from ganking more Ventures. As the Venture death toll rose, so did the tension in the system. Other rebels--now deprived of their mining ships--began to speak up. 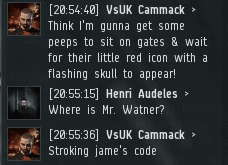 VsUK decided that if his words were ineffective, he would need to take action. He announced his intention to engage in anti-ganking. 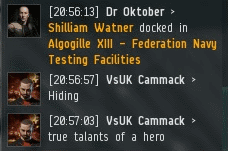 The resistance grew. Could they succeed in shutting down our Agents' operation? 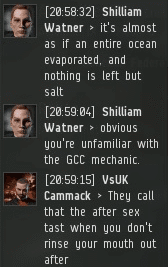 Agent Shilliam brushed off the unfounded attacks on his courage. He helpfully explained EVE game mechanics, such as the mandatory 15-minute wait between ganks. 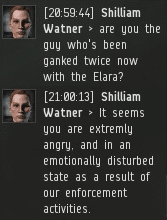 Shilliam zeroed-in on VsUK's problem. The miner had lost a pair of fail-fit blingy Ventures, each one worth almost as much a Retriever. No wonder he held such a grudge against our Agents. 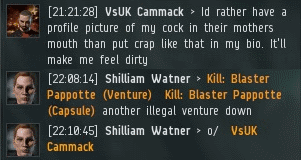 Shilliam's GCC timer ran down, freeing our hero to kill another Venture. VsUK was still griping in local. Gallente Ambrye, a permit-carrying miner, criticized VsUK for losing blingy Venture modules. It was then that VsUK realized that his credibility as an anti-Code voice was in serious jeopardy. If people knew about his losses, they might not respect him enough to follow him into battle. He needed to act quickly: 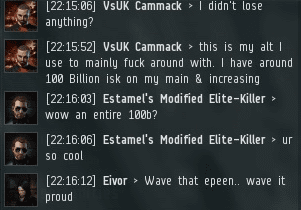 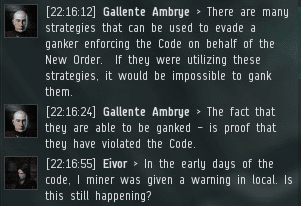 While VsUK licked his wounds, the locals turned increasingly to the pro-Code faction to get their information about the game. 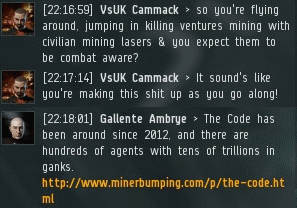 VsUK seethed. His opportunity to build a mass resistance movement was slipping away. 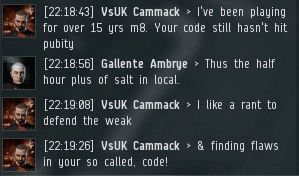 There was no sense in dialing back the bravado now. VsUK declared his absolute seniority, claiming to have played EVE for 15 years. (That's a lot of highsec mining!) Since the miner had been unable to find an opening for any anti-ganking actions, he resumed his war of words. VsUK was determined to find a flaw that could unravel the Code. 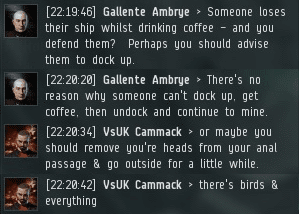 True, VsUK seemed to be going a little cuckoo. He was under a lot of pressure to find a way to fight back against the Code. But if he succeeded, he would make sure that the Code was never again enforced in Algogille.

To be continued...
Posted by MinerBumping at 16:47