Our Agents roam, and our Agents return home. After an extended tour of duty instructing TEST pilots how to gank, Agent Kalorned made his way back to the Gamis neighborhood. How had his old stomping grounds fared in his absence? 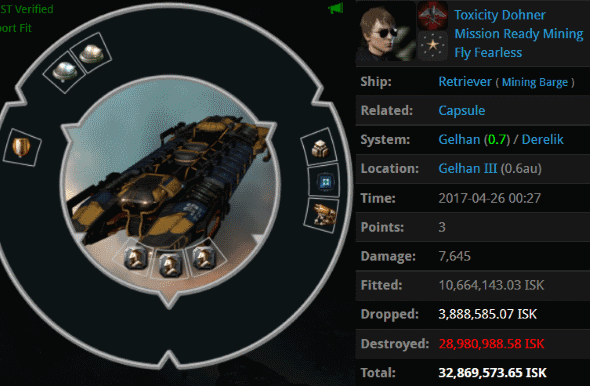 Kalorned's gank alts in The New Order Gamis Affiliates detected and destroyed an unlicensed Retriever in the Gelhan system. A few jumps away from Gamis, Gelhan is one of the few ice mining systems in the Derelik region. Kalorned was appalled by Toxicity Dohner's fit. Though it had some tank modules, the barge had one Ice Harvester and one Strip Miner. This guy needed help.

Toxicity claimed to be too poor to buy a mining permit. When Kalorned advised him to borrow money from a friend, the miner claimed he didn't know how.

He may have been too inexperienced to know how to receive isk, but someone had taught him the "new player" narrative. Toxicity also possessed the standard toxic attitude of the highsec carebear. Apparently his training was very selective.

Less than a minute after wishing death on Kalorned in real life, Toxicity asked for mercy. Typical miner.

Kalorned sighed. Toxicity was full of excuses and showed no interest in learning how to play EVE properly. Our Agent grew concerned that the Gelhan system might have fallen into disrepair during his absence.

After Kalorned's alts' GCC timers expired, he prepared to gank another unlicensed miner. RM-1138 received ample warning, which he laughed off. Older, wiser residents of the system knew better. But RM-1138 planted himself in an asteroid belt and wouldn't budge. 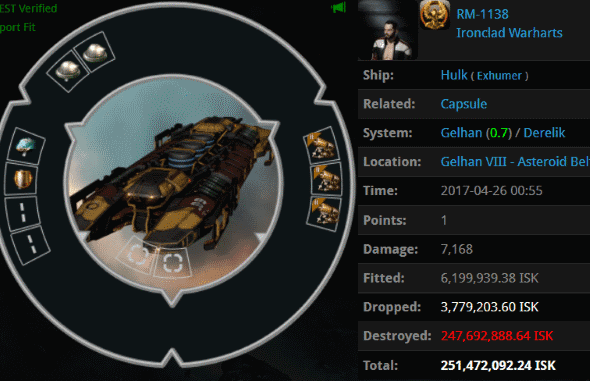 Kalorned was surprised and disappointed to see that even after all these years, some people still pilot fail-fit Hulks.

Immediately upon losing his Hulk, RM-1138 warned everyone that the mighty CODE. alliance was active in Gelhan. I suppose the miner wanted everyone to benefit from his amazing foresight. 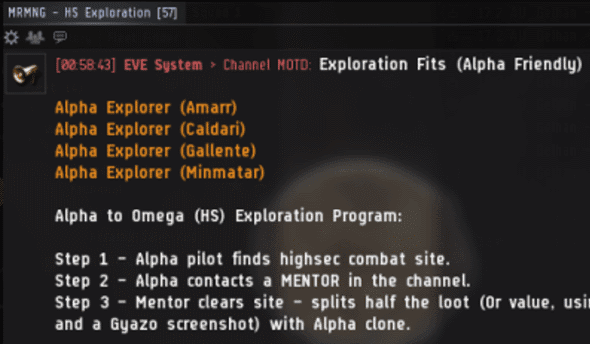 By this point, Kalorned was convinced that bot-aspirancy had returned to Gelhan. But things soon took a turn for the unexpected. One of his alts, Keraina Talie-Kuo, suddenly received an invitation to join an in-game channel. The channel was affiliated with "MRMNG": Mission Ready Mining.

Our Agent recognized the name immediately. Mission Ready Mining was the corporation that Toxicity belonged to. Our hero resolved to gather whatever intel he could before being kicked from the channel.

Immediately upon joining the channel, Kalorned's alt saw that the ongoing conversation revolved entirely around himself and his activities in Gelhan. 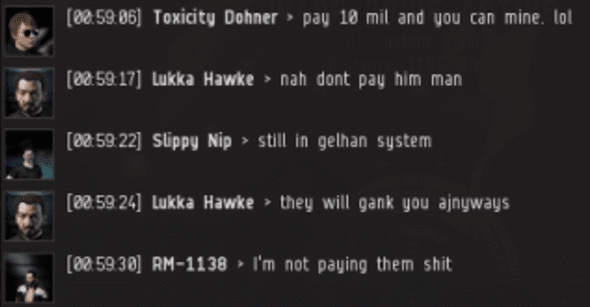 From the conversation, Kalorned surmised that this was some kind of anti-ganking intel channel, but it had apparently grown up completely independently from the official Anti-Gankers. Unsurprisingly, they were spreading misinformation about the value of New Order mining permits.

Even more alarming: RM-1138, another recipient of Kalorned's justice, was speaking in the channel. Unlike Toxicity, he wasn't a member of the Mission Ready Mining corp. Had Kalorned uncovered a conspiracy? How deep did this rabbit hole go?