Previously, on MinerBumping... Agent Alt 00 brought comfort and joy to the Nakugard system. The mood was spoiled by a grouchy rebel miner named Centurion Dorn, who was still sore from the loss of his Orca nearly a year earlier. Alt 00 resolved to help him see the light.

In situations like these, the rebel miner often tries to appeal to his fellow miners for support. Their defiant attitude rarely wins them friends, however. Highsec miners aren't very personable.

Centurion piloted an Orca and 4 Skiff alts. Destroying any of them would require several gankers. Since Alt 00 was the only Agent in the system, Centurion felt completely safe. It was then that our Agent deployed a tactic that took Centurion completely by surprise: miner bumping.

Centurion's surprise turned to alarm and anger when he realized that Alt 00 was capable of bumping his Orca right out of the asteroid belt. 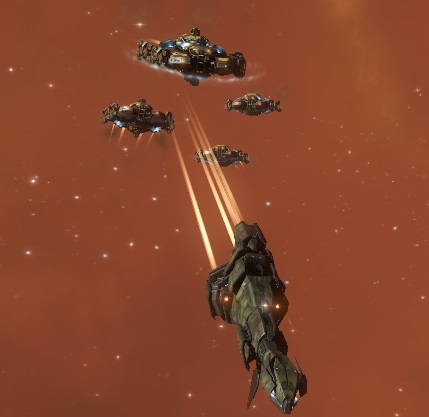 Like many multiboxing miners, Centurion used his Orca as an anchor for the rest of the mining ships. His Skiffs were set to orbit the Orca. When Alt 00 bumped the Orca far from the belt, the Skiffs automatically followed.

Because Centurion was too lazy to manage the Skiffs individually, they joined his Orca far outside of mining range. The miner was appalled. Surely the mighty CODE. alliance wouldn't approve of such a cheap tactic. Who ever heard of bumping miners?

Seething with rage, Centurion could do nothing but grind his teeth. Miners hate being ganked, but some hate being bumped even more. 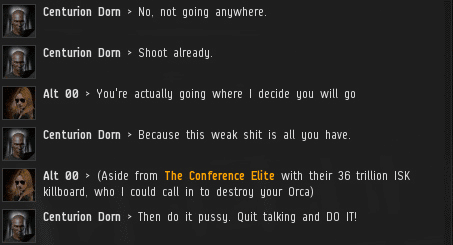 Centurion couldn't stand to be defeated by a bumper. The furious carebear demanded that Alt 00 gank him.

Our Agent gave the miner a quick history lesson: The salvation of highsec was announced with a bump.

How could Centurion counter the bumping tactic? The miner's mind raced, albeit at its own pace. 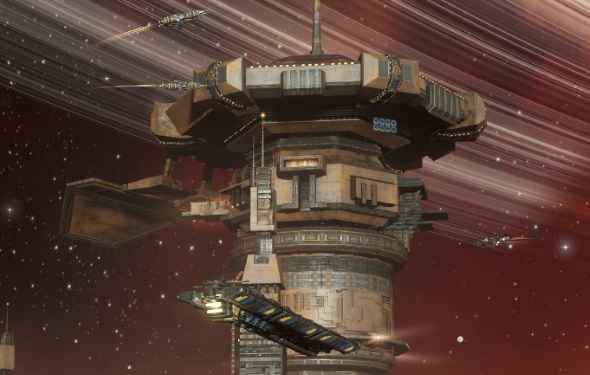 Centurion warped himself and his alts over to a nearby station and parked there. Eventually he decided that all he could do was wait for Alt 00 to leave the system. Time passed.

The Orca and its quartet of Skiffs sat by the station. Centurion tried to shame Alt 00 into abandoning his use of the bump. No such luck.

Alt 00's scout alt kept a watchful eye on the neutered mining vessels. All Centurion could do was bark in local.

The bump is a powerful thing. Only the absolute integrity of our Agents keeps them from being corrupted by it.

A Nakugard resident stopped by and shot fireworks at Alt 00's scout. It was fitting way to celebrate Code Day.

One by one, Centurion's Skiffs logged off in defeat. Illuminated by the fireworks, Alt 00 stood triumphant in Nakugard for all to see.
Posted by MinerBumping at 17:50