Previously, on MinerBumping... Agent Kalorned humbled the Mission Ready Mining corp by single-handedly shutting down its mining operation in the Gelhan system. Despite its paper membership of thousands, Mission Ready Mining was unable to break Kalorned's siege of Gelhan. MRM resorted to increasingly desperate measures.

Few of our enemies are willing to invoke the duel Tests; they lack the Valour, Wisdom, and Fortitude necessary to complete them. Lukka Hawke claimed he was ready to step up.

Within seconds, Lukka chickened out. He withdrew his challenge to duel Kalorned.

The remaining MRM members in Gelhan were again disappointed by the failure of one of their champions to defeat Kalorned.


Sunjiu > i see fear in you words
Kalorned > That's interesting
Kalorned > It so happens I see bot aspirancy in yours
RM24 > who's the bot... maybe we can have some fun with him
RM24 > from someone with the ethics of Hitler

Since they were completely unable to mine ice, the carebears had little alternative but to "speak truth to power". Which is to say, whine in local.


Sunjiu > this is fun prove to my guild mate iam a bot please
Kalorned > No further proof is needed beyond tonights conversation
Kalorned > You have been found guilty of bot aspirancy
RM24 > LOL... that's hysterical
RM24 > Kalorned know he's not a bot... but you on the other hand with scripting

The evening's events reached the point where Kalorned felt it was appropriate to individually judge some of the miners. They didn't take it well. In spite of Kalorned's ability to stop them from mining, they refused to accept the legitimacy of his rule.


Lukka Hawke > well Kalorned its been boring but im gonna go do ffaction warfare. fight people who are actually not cowards
Kalorned > Lukka Hawke have a wonderful evening
Lukka Hawke > Kalorned i hope you fly into the sun
Lukka Hawke > actually let me rephrase that. i dont really care about you at all

Initially hopeful that our Agent would "get bored and go away", the docked-up miners got bored and went away.

The New Order isn't satisfied merely by demonstrating our supremacy. We want to win the hearts and minds of the people we govern. Kalorned took the first steps.

After more than six hours of unchallenged mastery of Gelhan, Kalorned ganked one final miner and called it a night. The next day, he returned to find that MRM had greatly strengthened its defenses. The new MRM ice mining fleet was accompanied by more than a dozen combat ships and logistics cruisers. 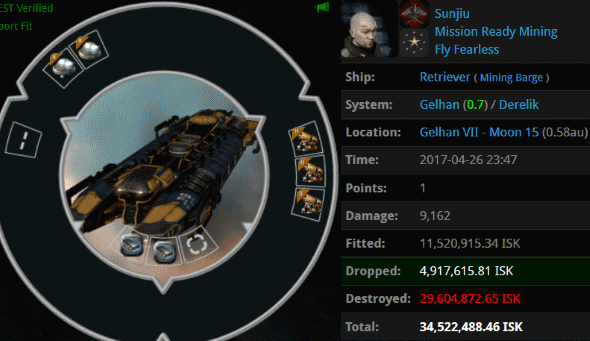 MRM had thousands of members, but Kalorned had something much more powerful to call upon: the Code. His gankers dove into the ice anomaly and ganked an MRM Retriever right on top of the defense fleet. 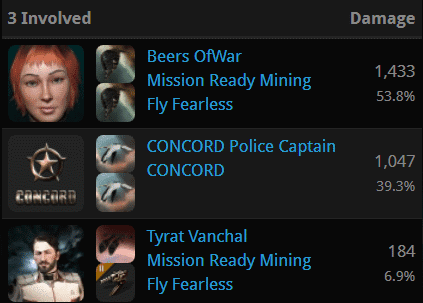 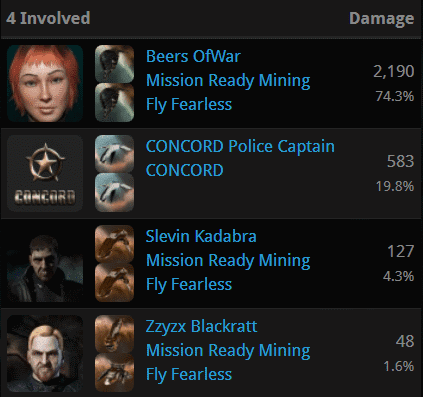 Most of the MRM defenders didn't respond quickly enough; they were likely AFK. Those who were attentive proved to be even worse at anti-ganking than the "official" Anti-Gankers. Their strategy was to counter-gank Kalorned's Catalysts. The presence of CONCORD on the Catalyst lossmails indicates that the MRM defenders didn't shave even a second off of the Catalysts' gank time.

Nevertheless, the MRM defenders took the loss well. Encouraged by their Code-compliant reactions, Kalorned felt he was making progress. As he resumed bumping operations and cleared out the ice anomaly, Kalorned decided to check in on the MRM intel channel:

The previous day, one of Kalorned's ganker alts had been mistakenly invited into the channel and still wasn't banned. Kalorned noticed a decent number of non-MRM personnel in the channel. One of them, Isabella Finn, asked for a report on Kalorned. Though one miner tried to put a brave face on things, Toxicity Dohner was out of patience and frankly admitted Kalorned had taken over Gelhan.

Despite not belonging to MRM--or perhaps because of it--Isabella was looked upon as some sort of protector. Kalorned checked her profile and discovered she was a member of Dirt Nap Squad. Often referred to by the initials "DNS", the formerly active PvP alliance is perhaps best known for its most famous member, long-time CSM villain Trebor Daehdoow.

Isabella assured the miners that if Kalorned didn't stop bumping and ganking them, DNS would show up and give him a proper beating. It appeared that Mission Ready Mining's powerful friends were about to show up in force.