Ah, the time has come--time for the Highsec Miner Grab Bag. What real-life death wishes will herald this edition?

Highsec miners may be the only group of pro-cancer people you'll ever meet.

Fear not, Agents. If a miner sends you an EVEmail like this one, you can nullify the curse by forwarding it to 20 people within 20 minutes.

In case you were curious, "RCMP" stands for the Royal Canadian Mounted Police. For some reason, HolySheet1 thinks that the Mounties may already have a file open on Agent Dom Arkaral.

Another of our Agents got petitioned; appropriately, Agent Bob the Fourth was petitioned on the Fourth of July. I'm not certain what the "SSR" refers to, but apparently they take several months to act. I guess they're some division of CCP. 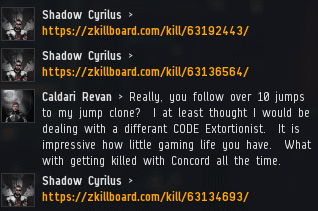 No matter how long it takes, our Agents always get their man (or bot). Not unlike the Royal Canadian Mounted Police, come to think of it...

On occasion, a miner's Code violations will be reported to their CEO. For some reason, miners don't like this. They can be so secretive. 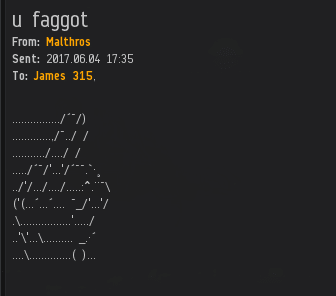 Carebears, if you're going to send me a message like this, be sure to include a link to your lossmail.

Tibby Dobbs instructed our Agent to go die in a hole. But then he changed his mind:

It took the miner over four months to reply. It doesn't look like he calmed down very much in the interim. 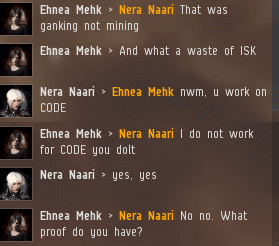 An example of miner "friendly fire": After a gank occurs in a system, miners will often accuse each other of being spies.

The Code isn't really a spoon so much as it's a mirror: You can tell what kind of person you are based on your reaction to it. (If you instinctively like the Code, you're one of the good guys.)

If the Code had been around in the old days, maybe fewer players would've left EVE, and CCP wouldn't need to try so hard to get them back?

It's true, crime doesn't pay. But the Code always does. Always!
Posted by MinerBumping at 17:10