Every teardrop has a story.

Highsec whiner/miner Nutterbut appeared on an edition of the Highsec Miner Grab Bag. He didn't tell me his story, but I could tell he'd been forced to take a bite of a Code sandwich. And that he didn't like it. 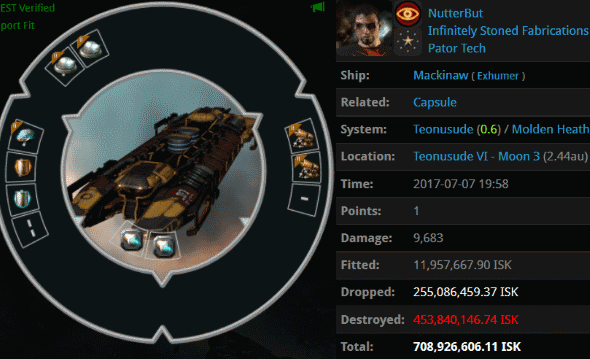 Sure enough, Nutterbut had been punished for violating the Code in a fail-fit Mackinaw. Despite playing EVE for the last 8 years, Nutterbut couldn't come up with a decent Mackinaw fit (if there is such a thing). Although poorly fit, the killmail screenshot doesn't explain why the Mack was worth over 700 million isk.

Yes, that's nearly half a billion isk in strip miners--sitting in the cargo bay. 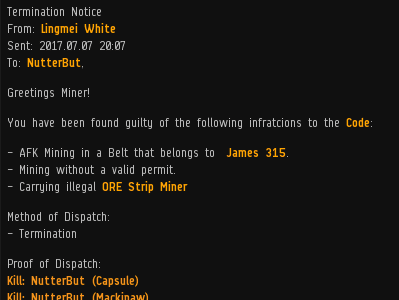 Lingmei White was one of several Agents whose patrol was responsible for handling the Nutterbut matter. After reading the Highsec Miner Grab Bag, he gave me a detailed report of the incident.

Nutterbut had pretended to be ignorant of the Code in his EVEmails to me, but in fact he'd received plenty of info from Lingmei. He replied with a level of hostility typical of carebears whose AFK slumber was disturbed.

After Lingmei sent him more Code-related materials, Nutterbut quickly started catching up. Now he was only three years behind. 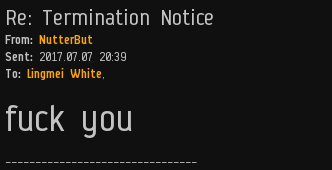 Even so, progress was slow. In the brief moment that Nutterbut contemplated parting with 10 million isk, he became enraged. What a greedy little miner. 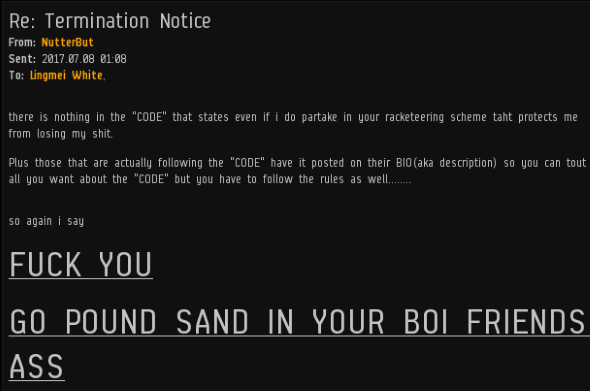 Nutterbut ranted about an alleged requirement of New Order Agents to put something about the Code in their bio. The hypocrite never put a mining permit in his own bio, though. (In fact, Agent Lingmei did have a link to the Code in his bio.)

More than a day after being ganked, Nutterbut finally started reading the informational EVEmails that Lingmei had given him. He was outraged to discover that he'd been cited for carrying ORE Strip Miners; he couldn't see how that was a violation of the Code.

Miners, this is another reason why you need to read MinerBumping every day--and read all the posts you've missed so far. Although there are over 2,200 published MinerBumping posts, you'd be amazed at how quickly you can read them all. Especially if you happen to work in an office.

Nutterbut still hasn't purchased a mining permit. His future in EVE remains in doubt, but the victory of the Code is a certainty.
Posted by MinerBumping at 18:25