Previously, on MinerBumping... Mercuri Thoth got worked up into a froth when Agents of the New Order destroyed her freighter. Agents Berry Nice and Trump The King were willing to discuss the matter like civilized adults. Despite their help, Mercuri struggled to cope with her loss.

Carebears, when you ask an Agent of the New Order to tell you what you're doing wrong, be prepared for a long list.

It became clear that Mercuri and Agent Trump had two entirely different ways of looking at the game (and probably life). Trump wondered if they could ever see eye to eye.

Mercuri tried to obfuscate her guilt by taking refuge in wacky analogies. But our Agents could not be misdirected so easily. 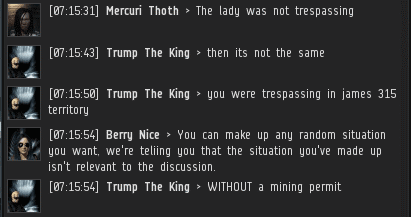 Trump and Berry kept their eyes on the prize. They knew the real issue here wasn't old ladies or Nazis or science experiments--it was the integrity of the Code. 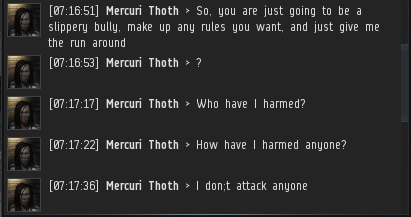 Misguided bot-aspirants frequently--and falsely--accuse our Agents of bullying, but they're rarely called "slippery bullies". It was an outrageous accusation. Needless to say, a non-bully cannot be a slippery bully.

I believe this is what is known as a "mic drop".

Mercuri laid to rest any doubts about whether she was a bot-aspirant. Anyone who's been in EVE long enough to pilot a freighter must surely know the name of the man who rules highsec.

Our Agents had difficulty keeping Mercuri's attention focused on any one point long enough to teach her anything. Her mind was wandering all over the place.

Once again, Mercuri wanted to talk about the real-life identities of those who had ganked her.

Trump The King had nothing to hide, so he was more than willing to reveal his identity. But to what end? 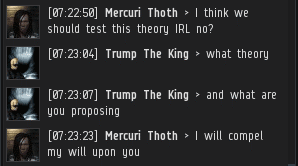