This Round's On Me

Was it a dark omen? Agent Zapp Blappington dispatched two newly minted gank alts to the ice anomaly in the Mitsolen system. His intended target, Raymond Yudinov, immediately warped out after watching Zapp's gank alts land on a faulty warp-in.

The good news is that Raymond wasn't AFK; his reflexes were decent, even. But Raymond clearly suffered from unauthorized thoughts and beliefs about the Code.

Highsec miners are creatures of routine, and they're pretty much all alike. Even so, every once in a while, a miner will do something unusual. Sen Zhou heard the discussion about mining permits and floated the possibility of a system-wide permit.

Sen Zhou's "system permit" idea was a question of first impression for Agent Zapp. He consulted his copy of the Code and determined that there was no basis for it.

Raymond's Goofus status was confirmed: He became more irritable after hearing my name.

Although the Code didn't allow for the Mitsolen system itself to be granted a mining permit, Sen couldn't shake the idea. She followed up with a question about buying a permit for all 25 players in local. Zapp agreed that this was feasible.

Whenever someone suggests that they might purchase a permit (or permits), it tends to trigger the other miners in local. Raymond warned Sen against it. However, Sen was a classic case of a miner who runs the numbers. Buying a permit makes too much sense not to do it.

Still, Sen had some qualms. Agent Zapp was very reassuring, though. Our Agents ooze credibility and trustworthiness.

The miner did some additional reading. For the hardened rebels watching her in local, she was getting a little too close to a pro-Code stance. Tension grew thick in Mitsolen.

Finally, Sen decided it was too good an idea to pass up. She announced that she was buying mining permits for everyone in the system.

Agent Zapp prepared to open his wallet. It was a good day to be an Agent of the New Order.

By receiving a quarter-billion isk in one sale, Zapp's isk/hr ratio went through the roof. More importantly, he had served the Code. Impressively, Sen Zhou even bought a permit for crusty old Raymond. 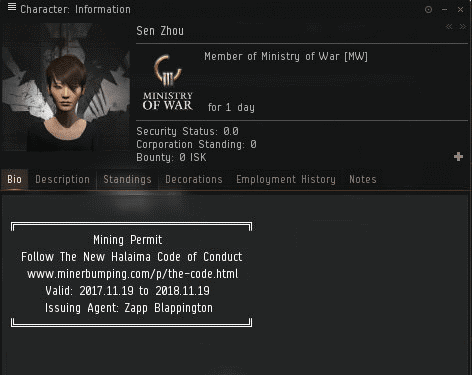 Of course, it's not enough simply to buy a permit--or to have one bought for you. To benefit from Sen's generosity, the miners would need to display the mining permit in their bio (as Sen did) and obey the Code.

In the New Order, victories tend to lead to more victories. Our Agent used Sen's isk to help fund the purchase of his first 315 shares in the New Order. And one good turn deserves another: Zapp decided to purchase the shares in Sen Zhou's name. Who in highsec wouldn't want to participate in a glorious movement like ours?
Posted by MinerBumping at 19:07