A Perfect Election, A Perfect Democracy

Occasionally a misguided miner will question the authority of the New Order and its Agents to enforce the Code. If you encounter miners who challenge the legitimacy of my rule, you can help them out by directing them to this post.

The time for objecting to the Code and to my election as the one true authority in highsec is long past. 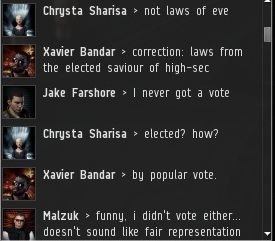 As it says in the Code, the law in highsec is the product of a democratic process. The votes have been cast, and now it's time for everyone to work together. 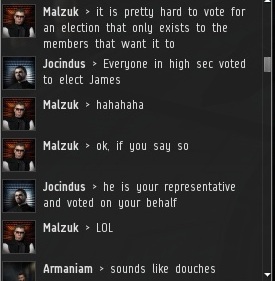 Rebellious miners who don't know their history will often question the source and/or legitimacy of my authority. It's crystal clear, though: I acted as proxy for all the players in highsec, and unanimously voted myself Saviour of Highsec. 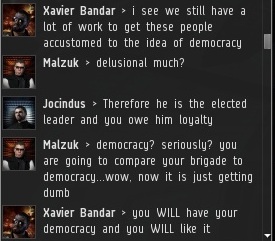 For practical reasons, it would not have been possible to hold a vote in which every player in highsec cast a ballot himself or herself. But more than that, the highsec players were not ready to vote. It was necessary and appropriate for some qualified party to vote on their behalf, acting in the role of a guardian or trustee. I took time from my busy schedule to perform that service for all the thousands of players in highsec. 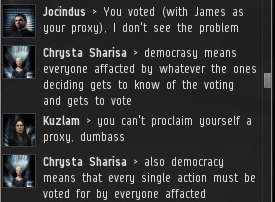 This is true democracy. Democracy is designed to represent the interests of all voters. Such a thing is only possible when votes are unanimous, otherwise the minority's interests will not be represented. By casting 100% of the vote in favor of myself and ratifying the Code, perfect democracy was achieved.

It was the only way the vote could have gone. It's not possible to represent the interests of all voters if any voter--for whatever reason--votes against his own interests. Once again, by voting on behalf of everyone else, I ensured that no errant votes were cast. If the miners of highsec were enlightened, this would not have been required. Of course, if the miners of highsec were enlightened, highsec would not need a Saviour.

Isn't that just common sense?
Posted by MinerBumping at 17:36