When LuNaRiAn SeRpEnT starts crying, that can mean only one thing: It's time for another edition of the Highsec Miner Grab Bag!

Khamul Ulairi claims to speak for everyone in highsec, which is absolutely absurd. Highsec hosts an incredibly large, diverse population--one with many competing views and interests. I'm the one who speaks for them.

Ah, betrayal. It's always sad to see a permit-owner betray the Code by voiding their own permit.

Further proof: A Goofus who spends 10 million isk is still a Goofus. 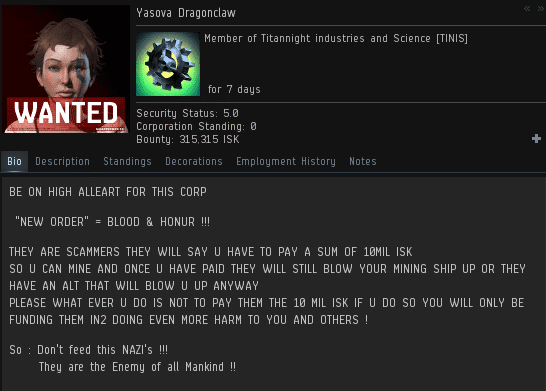 Agent Aaaarrgg has over 24,000 kills and nearly 6 trillion isk in damages to his name, yet moranno thinks he can lecture him on PvP. (According to zKillboard, moranno's last kill took place about eight years ago.)

To be honest, "the proper pirate groups" sounds like something you'd hear about from a guy who never played EVE.

Though carebears often have difficulty communicating, their hostility invariably makes its way through.

You can always tell a bot-aspirant by the way they invoke the name of the Saviour. My name makes bot-aspirants see red. By contrast, it causes good people--like my Agents--to beam with pride. It's really powerful.

Look for Victor Kaj to command a fleet "one day". 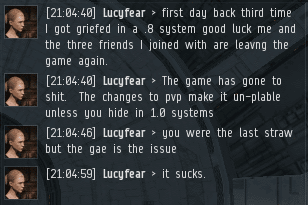 Why do people blame us for driving carebears away from the game? The truth is, carebears don't like EVE. They never did.
Posted by MinerBumping at 18:10