Previously, on MinerBumping... On every level, Agent Bob the Fourth achieved victory over the bot-aspirants of Solitude. Thanks to his brave Code enforcement efforts, the culture of the region had changed. Miners were actually excited to see him in local and enthusiastic about buying permits.

Then, while Agent Bob was AFK, Furbie showed up to sour the mood. Earlier in the year, Bob had encountered Furbie:


Furbie > wat ship is bob in?
Furbie > link killmail so we see wat ship hes in
Chance Mayfield > It was a Coercer.
Bob the Fourth > This is a good start, But you really will need to buy a permit and follow The Code if you want to continue to mine here.
Furbie > if i find you i'll pay my permit with lead

Furbie had styled himself as a protector of the miners. He thought he could take down an Agent of the New Order.

Like all other Anti-Gankers, however, all Furbie could do was watch as his carebear friends died.

Now Furbie was sending Bob strange EVEmails. What could it mean?

The rebellious carebear had some sort of axe to grind about a citadel. Bob did a quick check of Furbie's lossboard to see what might be the matter: 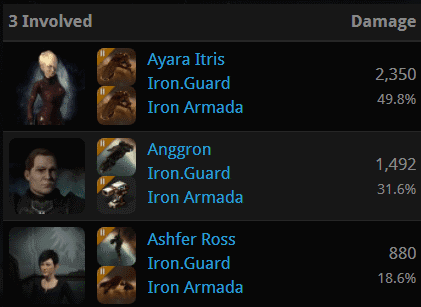 Minutes ago, Furbie had lost a Confessor to the same group that had tried and failed to gank one of Bob's permit-owning miners. Bob informed Furbie of the incident--which proved that Furbie was beneath even the miners.

Imagine it: Fifteen years in the game, and Furbie was still a Goofus. Could our Agent ever save him?

Furbie tried not to show it, but he was rankled by the fact that Bob had a copy of the embarrassing killmail. He couldn't resist firing off another EVEmail without waiting for a response:

The rebel threatened to wardec Bob's modestly sized corp. Our Agent was courageous as ever in the face of this saber-rattling.

Furbie insisted that he'd win a 1v1 against Bob, provided the conditions were right. Our Agents laugh at comments like this. In the New Order, we don't need to leave highsec to engage in PvP. We're capable of destroying tens of trillions of isk even under the watchful eyes of CONCORD--while the nullsec dwellers wait endlessly for the "right moment". 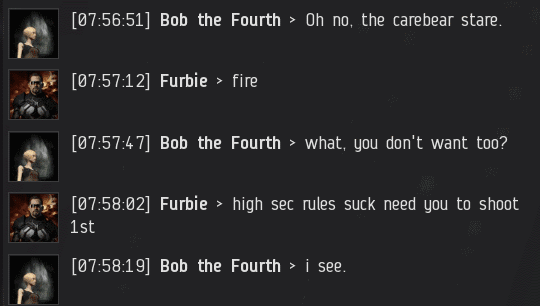 Though Furbie stopped sending EVEmails, he was interested in continuing the conversation in local chat. 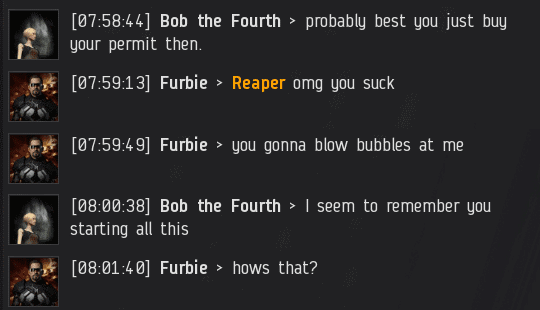 Agent Bob looked on, amused. He threw Furbie off by testing his short-term memory. 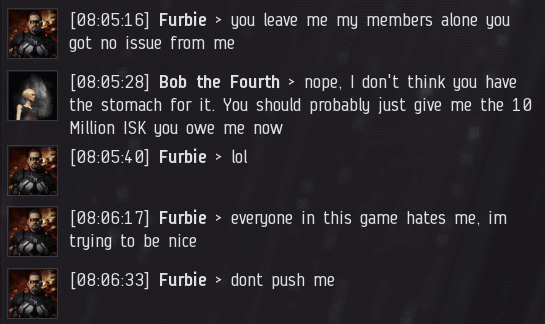 Bob knew that he'd get 10 million isk from Furbie one day--or that Furbie would leave highsec or quit EVE. All of these scenarios were fine by Bob.

One of the most embarrassing things that can happen to a Goofus is to have one of his own corpmates tell him to stop making a fool of himself in local. This happened to Furbie, who pasted the evidence in local for all to see. 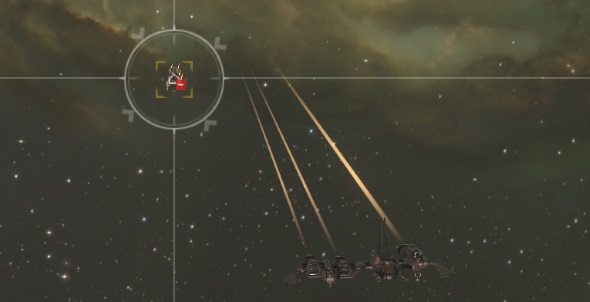 Furbie continued to follow our Agent around the system, giving him the carebear stare. Blocking Bob hadn't helped the carebear ease his temper or forget his grudge. When a carebear follows an Agent in this way, he unintentionally becomes a sort of trophy. Bob looked upon the Solitude region and was pleased. He had done well.
Posted by MinerBumping at 18:10