The Tears of zahara, Part 1

Want to hear something unbelievable? There are still people who autopilot in pods. 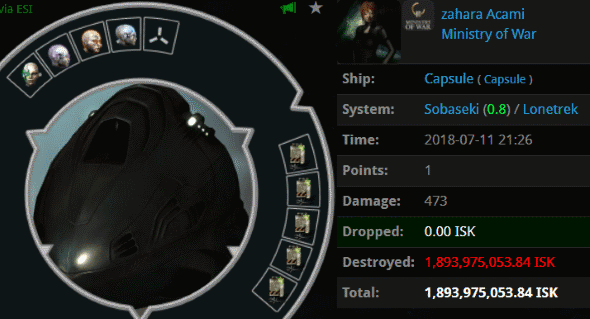 zahara Acami chose to go AFK and autopilot her pod through highsec. The incredible sight caught the attention of Agent Katy Melons, whose vigilance was rewarded with a 1.8 billion isk podkill.

Agent Katy notified the carebear of her termination. zahara bristled. She lashed out at our Agent--as though there's nothing wrong with slowboating a pod to a stargate in New Order territory. 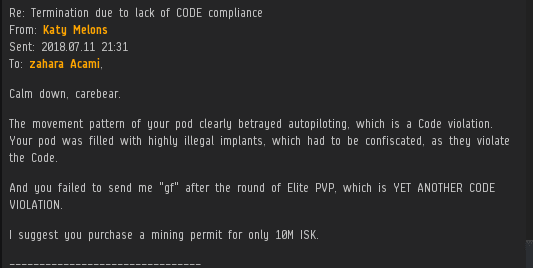 Katy refused to back down. 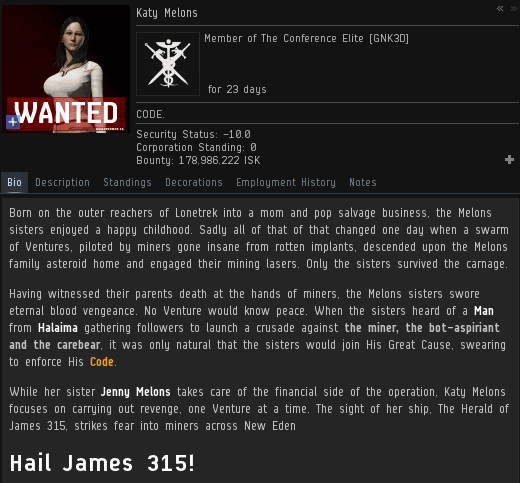 Our Agents are made of strong stuff. No matter what the enemies of the Code dish out, the New Order's finest are always prepared to fight for what's right.

zahara dug in her heels. She denied the teachings of the Code and demanded to know why Katy had ganked her pod instead of ganking a capital ship. Classic deflection--but things only escalated from there.

zahara vowed to get revenge for her lost pod. So far, Katy had only seen zahara piloting module-less vessels. If zahara acquired a ship capable of equipping a weapon, however, she might become more dangerous.

Each time Katy encouraged zahara to read the Code, the carebear grew more agitated. She revealed that she was part of an apocalyptic rebel faction that blames the Code for EVE's declining playerbase.

I had a feeling this MinerBumping post would come in handy.

zahara was confused. On the one hand, she was basically spouting the old myth about ganking driving away new players. On the other hand, she seemed to have respect only for old players. zahara was also confused about my age--I arrived in the EVE galaxy twelve and a half years ago. Best thing that ever happened to the game.

The carebear and the Agent continued to write to one another. By this point, such exchanges usually cease. But zahara was still in the mood for a fight.

zahara couldn't bring herself to accept any responsibility for recklessly losing her pod. Yet she was no closer to persuading Agent Katy.

It looked like a stalemate had developed, with both sides irretrievably entrenched in their own views.

But zahara aimed to break the deadlock with a ruthless new strategy: She would get CCP to ban Katy from the game.