Over One Trillion Five Hundred Ninety-Eight Billion in Shares Sold

There's no such thing as a bad reason to buy more shares in the New Order. 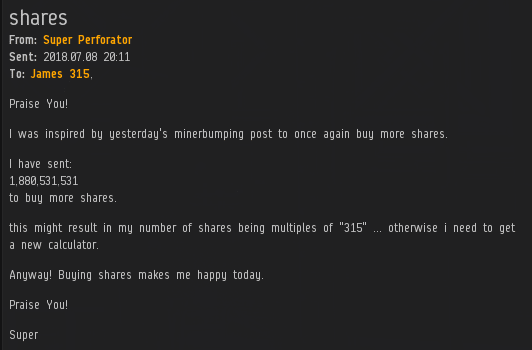 Super Perforator's math is sound, though shares are purchased in units of a million isk, so amounts less than a million are disregarded. Super bought 1,880 additional shares of New Order stock, taking us past the the 1,597 billion isk mark. Super's own holdings now total 31,531 shares. Even more important: the addition of another Supreme Protector's Tip of the Hat™.

Elvira Leone also increased her holdings, buying 300 more shares and earning a Supreme Protector's Tip of the Hat™ for taking us past the 1,598 billion isk mark. Decent timing.

The only thing finer than killing a highsec miner...

Killing the ship (or in this case, the blingy drones) of a "nullsec" miner who mines in highsec.

Fork YoCouch was a contradiction. He hated nullsec's violence, so he went to highsec to do his mining. But he disdained highsec, because he was really a nullsec guy.

Don't expend too much energy on trying to understand the likes of Fork YoCouch. Whether he's in highsec or nullsec, you can count on him to lose his stuff.

People like Fork will tell you that they don't need to follow the rules. They have the freedom to do anything they want, but they use that freedom to mine in highsec--before their mining equipment gets blown up. These "nullsec" miners in highsec need the Code more than most.
Posted by MinerBumping at 18:01