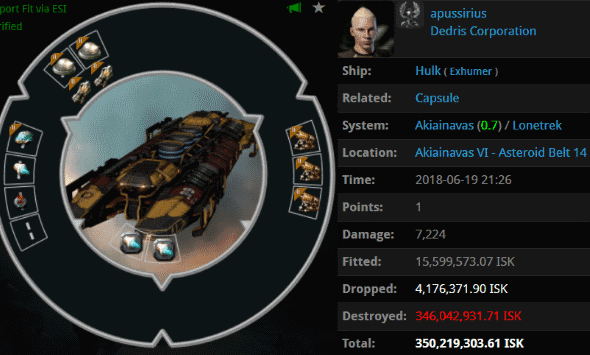 apussirius lost his mining ship and was invited to join NOL_Public, the channel for New Order Logistics corp.

Oh, great. Another "new returning player". How has CCP been attracting all of these old subscribers? And why are they all highsec miners? 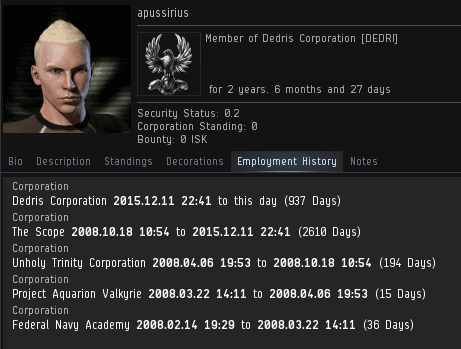 Though apussirius has been around for more than a decade, maybe he only came back shortly before he joined Dedris Corporation. In that case, he's only been playing since 2015--so he's basically a newbie, right?

Our Agents weren't interested in hearing excuses. When a miner joins one of these public channels, they tend to get rushed into buying a permit right away. However, this time, the Agents had an especially good reason for wanting to get the deal done as quickly as possible. 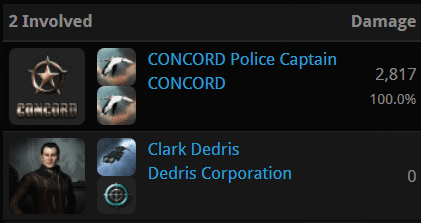 When apussirius' Hulk was ganked, one of the Catalysts had received a jamming attempt from Clark Dedris. Apparently he was on guard duty at the time. Naturally, his attempt to foil the gank had failed.

The Catalyst pilot in question was Agent Katy Melons. Clark joined a private convo with Katy right after the gank. But Clark had no idea that his corpmate was in NOL_Public at the time.

Needless to say, Clark had a lot more fire than his corpmate did. He came out swinging. 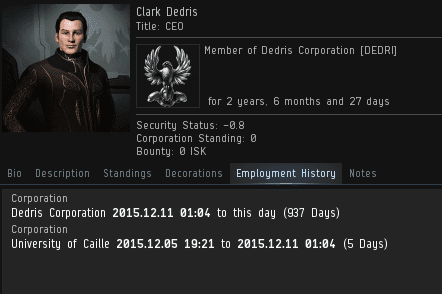 Clark was the CEO of apussirius' corp. And from the sound of things, he would discourage apussirius from buying a permit.

Without wasting any time, the fiery CEO declared war against the mighty CODE. alliance. Agent Katy showed resolve--and maybe something more than that. She was stalling him.

In NOL_Public, the "hard sell" proceeded apace. Within moments, the miner was busted twice. He had to admit that he had the cash to pay for a permit.

Less than ten minutes into the conversation, our Agents were closing in on a sale. It helped that apussirius was surrounded by a bunch of helpful Agents, rather than a bunch of poisonous rebel miners in local chat. But if apussirius' CEO found out what was going on, he would torpedo the deal in a nanosecond.

Clark was preoccupied with Katy at the moment. She expertly taunted him. As long as Clark was hurling threats at her, he wasn't checking in on his corpmates. But would he get suspicious?

With just a few years of EVE under his belt, apussirius only felt comfortable mining in 1.0 security systems. Maybe one day he'd have himself an adventure in 0.7, but not today. If the Code applied in 1.0 sec, then he'd probably need to get a permit. Our Agents could almost taste the 10 million isk.

The mining corp CEO's temper boiled over. Katy repeatedly invoked the name of the Saviour of Highsec. The stakes were too high not to. If Clark's attention strayed for even a moment, all would be lost.