Arthur Burton rarely felt the need to interact with other humans. He was a highsec miner. A bot-aspirant.

One day, Agent Imogen Avada started bumping him out of mining range. Arthur forced himself to remember how to speak.

Arthur was still able to speak, but his memory was foggier when it came to the Code. Imogen reminded him of his obligations.

The miner refused to purchase a permit. To justify his crime, he spun a tale about gankers secretly supporting botters.

Arthur presented his evidence of the conspiracy: 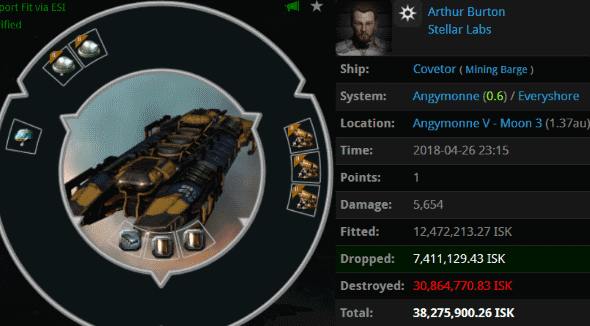 In fact, it was simply a Covetor killmail. Months earlier, Arthur had been ganked by Agents Dewey Coks and Best EVE Player.

According to Arthur, the two gankers had ties to a bot-mining operation in the system. Agent Imogen was skeptical. The pair had a history of killing miners. How bad could they be?

Imogen promised to investigate--but no evidence of wrongdoing was ever found. Arthur, on the other hand, had already been found guilty of mining without a permit.

Arthur's mining ship sat well outside of mining range. He sulked as he watched other miners helping themselves to the asteroids in "his" belt.

Agent Imogen was not unmindful of the other Code violators in the system. When she felt like it, she'd deal with them, too.

Arthur was still whining when suddenly he saw Imogen bump the other miners away from the belt. He was delighted by the sight.

The truth is that highsec miners often hate each other more than anyone else. Arthur was so tickled by watching other carebears being bumped out of range that he happily purchased a mining permit. But would his schadenfreude translate into Code-compliance?

Later that day, Arthur was using a Mobile Tractor Unit when it was abruptly destroyed by someone named Surri Ren.

One might assume that Surri Ren was an Agent of the New Order who was keeping Arthur honest by popping his MTU. In fact, Surri was an Anti-Ganker!

In one of the few recorded instances of an Anti-Ganker attacking a permit-owner, Surri used a Loki to target and kill the MTU. (Attacks on MTUs do not trigger CONCORD interference.)

Ironically, the Anti-Ganker had effectively done the New Order's work by destroying what amounts to a bot. Arthur, who admitted he didn't really support the Code, discarded his permit. Thus, Surri also inadvertently helped to prevent permit fraud. One way other another, the truth always wins out in highsec--thanks to the Code!
Posted by MinerBumping at 18:05