The Tears of zahara, Part 2

Previously, on MinerBumping... zahara Acami lost a pod worth 1.8 billion isk when she autopiloted it through highsec. zahara was at fault for violating the Code in a particularly foolish manner, but she blamed Agent Katy Melons, who had merely pulled the trigger. zahara threatened to get revenge for the gank--by reporting Katy to CCP.

The carebear let our Agent in on a secret: There was an active campaign to get CCP to ban her.

Behind the scenes, the carebears of highsec have been sending a deluge of petitions to CCP, demanding that all the gankers be banned for shooting their spaceships.

For years, miners have been begging CCP to outlaw PvP in highsec. Their efforts to remove ganking have failed. zahara freely admitted that the mighty CODE. alliance doesn't break any rules. But she was convinced that the years-long downward trend in EVE subscribers would motivate CCP to change the EULA.

In other words, zahara confessed to intentionally filing frivolous petitions. Katy's heart broke for all of the GMs whose inboxes were swamped with such nonsense. When the GMs return from summer vacation, they'll be faced with so much unnecessary work. Bad miners!

Why would this carebear be so confident that she could get our Agents banned, when every other carebear has failed? Katy advised the miner to stop autopiloting and to buy a permit, rather than resting all of her hopes on a delusion.

The carebear was ready to send her final EVEmail. She let Katy in on yet another secret: She had a history of getting gankers banned. Her threats weren't so empty after all!

Agent Katy quickly investigated the claim, which proved to be false. zahara was thrown off balance--a typical reaction when a carebear is confronted with the truth.

zahara had intended to end the conversation earlier, but she couldn't go out like this. She needed Katy to believe there was at least the possibility that zahara could get gankers banned by whining to CCP.

Spinning in circles, zahara claimed to have special access to CCP. She also claimed that the gank victim was really someone else, so nobody could verify whether the ganker was still playing EVE. Katy would need to trust her. 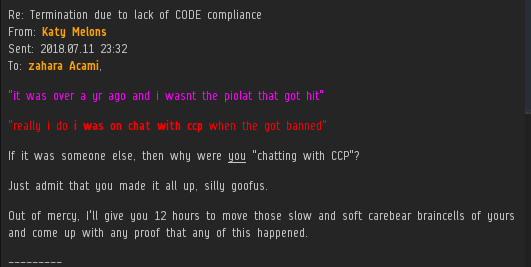 Agents of the New Order are educators--maybe the only true educators in EVE today. Katy wanted zahara to understand that autopiloting in a naked pod with 1.8 billion isk in implants was a bad idea. She also wanted zahara to accept the fact that making up stories about banning people for ganking (while simultaneously admitting that ganking is allowed under the rules) is foolish--and certainly no substitute for obeying the Code. 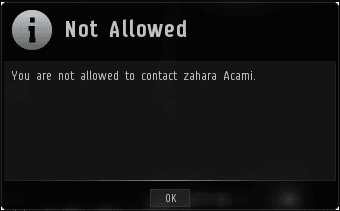 Unfortunately, some carebears choose to bury their heads in the sand. It's a bad way to live, but it's a good way to get yourself ganked.
Posted by MinerBumping at 18:05