Local chat is like a box of chocolates--you never know what you're gonna get.

...Though miner tears are very likely.

A lot of highsec dwellers don't engage with out-of-game resources or EVE websites. They get their information from random snippits of local chat. And that means "learning" about the game from people like Dracvlad. 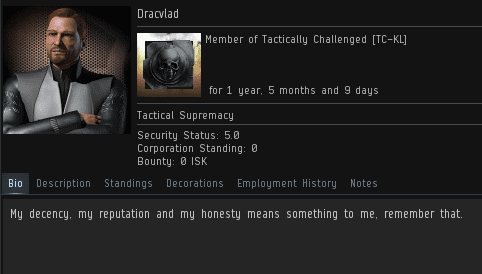 A clueless newbie might be forgiven for assuming that the Dracvlads of the world are a valid information source. Or at worst, that they're harmless. 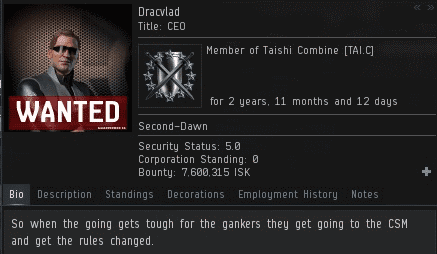 ...But those who read MinerBumping know better. Dracvlad, for example, is a notorious Anti-Ganker. This is the bio he had back in 2016.

When you rely on people like Dracvlad to teach you about game mechanics, well, good luck. You'll need it.

Luckily, even random players tend to be skeptical of the Anti-Gankers. Something about those anti-Code people is just... not right. People can sense there's something off about them.

Nevertheless, EVE players can be led astray by the rebels. We, on the other hand, are all about truth.

Anti-Gankers are unable to stop the mighty CODE. alliance from ganking, so they resort to shedding tears in local.

Like Dracvlad, Grand Design is one of their "leaders".

You may remember him as the guy who entertains his fellow rebels with fantastic tales about fighting the New Order.

When faced with an Agent of the New Order in local, Grand Design can still be entertaining--though unintentionally so.

Local chat provides our Agents with something to do between combat operations, while waiting out the 15-minute aggression timer. But the anti-Code rebels of highsec are basically incapable of engaging in combat, so local chat is pretty much all they have. Despite all of their years of practice, they're still bad at it. And they wonder why people call them Goofuses!
Posted by MinerBumping at 18:13