Previously, on MinerBumping... Solomon Iskander lost billions when he failed a courier contract due to his hauler getting ganked. Solomon reported to the MinerBumping channel to rage against the Code. Eventually, however, his desire to get reimbursement isk led him to buy a couple of mining permits.

Despite purchasing some mining permits, Solomon's attitude was not improved. In fact, he seemed put out by the whole thing.

As always, our Agents attempted to create a happy, positive environment. The moody miner wasn't very receptive, however.

One of the problems faced by the carebear was his lack of faith in the New Order and its Code. He was willing to buy permits, but it was as though he expected to be scammed. He could imagine nothing but bad things happening to him--yet all he could do about it was complain.

Mining permits are extremely effective at filtering highsec minerdom. Good miners are happy when they buy a permit. Bad miners only get grumpier.

Guess which kind of miner Solomon was?

Our Agents were astonished by Solomon's undignified and passive-aggressive behavior. Didn't he care about the effect that his tantrum was having on new players? 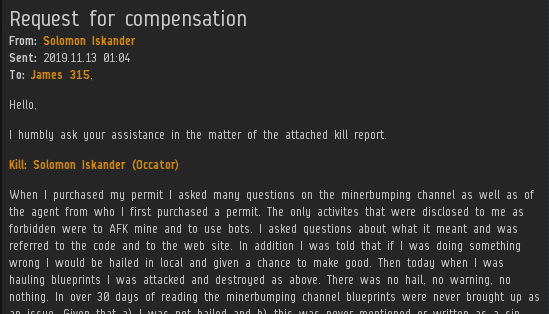 Now that he had some permits to his name, Solomon felt he was in a good position to pen a lengthy reimbursement request to the Saviour of Highsec. As recounted in the latest edition of the Highsec Miner Grab Bag, Solomon's request was denied at the last second because he made the mistake of displaying anti-Code material in his bio.

Solomon sent out his reimbursement mail and waited for a reply. He remained in the MinerBumping channel--and continued to sulk.

Against all odds, the miner was as cantankerous as ever. Nothing could cheer him up. Perhaps his mind was preoccupied with thoughts of isk. But this would mean that Solomon was a bot-aspirant.

Suddenly, Agent Lewak got an idea: Killing miners always cheered him up, so maybe Solomon's mood could be improved by ganking a miner? 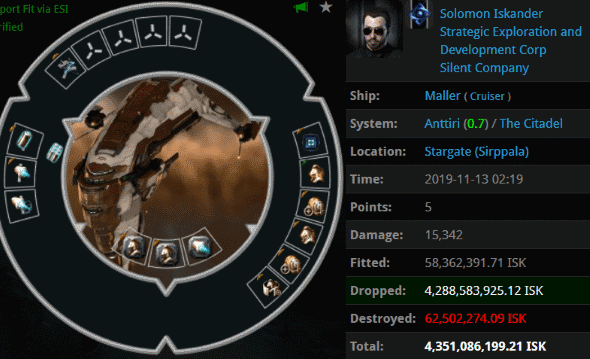 Unfortunately, Solomon chose not to join our Agents on a gank party. Instead, he attempted to resume his illegal hauling activities. This time he used a fail-fit cruiser. Less than an hour later, he was ganked by the same Agents who had killed his hauler--and in the same location. Billions more were lost. A few days later, Solomon suffered a baffling Orca loss when he inexplicably picked a fight with a battlecruiser in Dodixie.

After everything he'd experienced, Solomon still craved isk. As for his reimbursement request...

Let's just say it's not looking good.
Posted by MinerBumping at 18:04