Previously, on MinerBumping... aiva naali was just too smart and interesting for his own good. aiva was caught spilling secrets about his secret weapon projects to a captivated audience in a public channel.

For a mistake this big, aiva had to answer directly to the Saviour of Highsec. The "weapon smith" confessed that he had been careless.

In addition to paying a billion isk security fee, aiva planned to make things right by creating even more superweapons--which would serve as countermeasures to the leaked superweapons that Pandemic Horde was undoubtedly copying even as he spoke. 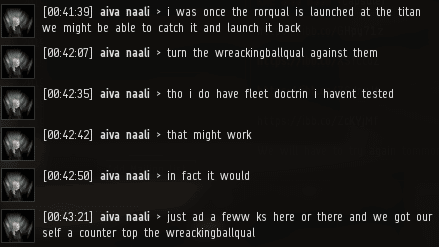 aiva wasn't too worried about Pandemic Horde creating their own versions of the "rat bomb" and "skank trap". But the "wreackingballqual" was another matter. In the wrong hands, it could pose a serious threat to the Imperium. Unless aiva designed a way to defend against it. 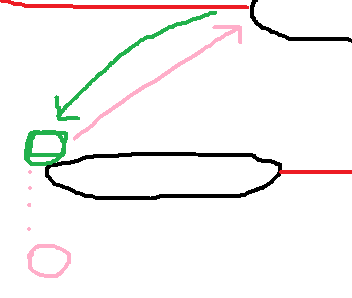 It didn't take long. Within minutes, aiva's fertile mind produced a working theory on how the wreackingballqual could be turned against itself.

The as-yet unnamed superweapon worked on the principle of defense in depth.

aiva sketched out the details as he imagined them. But they would need to be tested in the field.

While he was working on his counter to the wreackingballqual, aiva would also spend some time perfecting his ultimate weapon, "muse". But there was more to the story.

aiva decamped to the Discord channel, where he was already performing damage control with his most trusted associates.

All of aiva's superweapons contained a hidden weakness--including the superweapons whose details he'd accidentally leaked in the public channel. That would work to aiva's advantage, as we will soon see.

aiva envisioned an Imperium surprise attack against Pandemic Horde--and sooner rather than later. If everyone worked according to his plan, PH would be put out of business for good.

Then the other shoe dropped:

aiva's foolish mistake had, in fact, been part of his master plan all along. He wanted PH spies to overhear him talking about the wreackingballqual. But to make it convincing, he couldn't tell anyone about the ruse in advance.

aiva had done it: His eleventh-dimensional chess moves had carefully set the stage for the Imperium to deal a killing blow against Pandemic Horde. All that remained was for The Mittani and the rest of the Imperium to carry the ball over the finish line.