Agent Bauldis Tivianne was curious about the power of the bump. So he found a highsec miner and tried bumping him.

...Which brings us to the latest edition of the Highsec Miner Grab Bag! 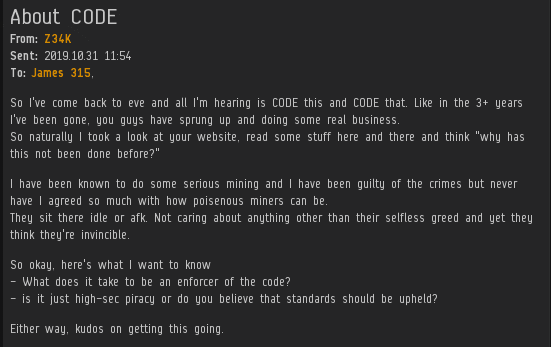 Though some of the rebels attempt to downplay the influence of the Code, the truth is that we're pretty much the thing going on in EVE.

...And another family member thrown under the bus. 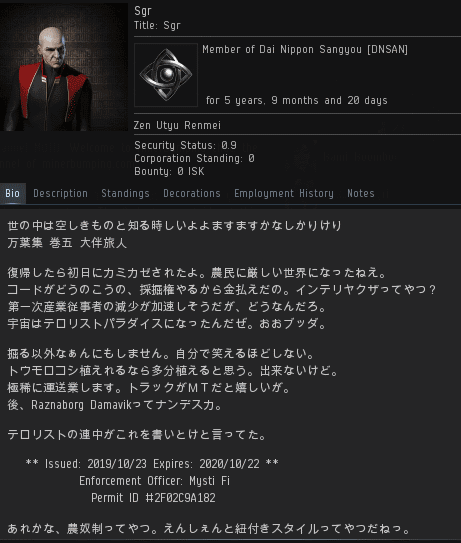 Japanese miner Sgr displayed a permit in his bio, but was it genuine? Let's see:

It's time to know that the world is empty.
Manyoshu Vol.5

When I returned, I was kamikaze on the first day. It has become a harsh world for farmers.
I'm paying for the mining rights. What is an intelligent kaza?
The decline in primary industry workers is likely to accelerate, but what about?
The universe has become a terrorist paradise. Oh Buddha.

I will not do anything other than digging. I won't be able to laugh at myself.
I think that if I can plant corn, I will probably plant it. I can't.
We carry the shipping business very rarely. I'm happy that the track is MT.
Later, Raznaborg Damavik was Nandeska.

The terrorists told me to write this.

That's the farmer system. The tie-in style is a guy.

All things considered, the skill training system in EVE is not that important. Our Agents are the ones who help their fellow players gain skill. 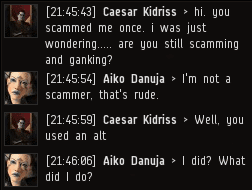 Most highsec miners lack social skills. For some reason, they introduce accusations into what could otherwise be a pleasant conversation. 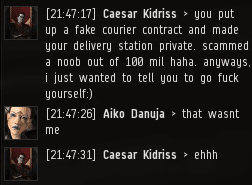 If you truly want to engage an Agent, you must first be willing to show some trust. 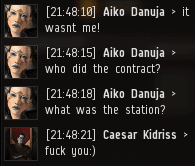 Carebears can be so cynical.

I haven't scammed anyone since, what, 2006? You see what I mean about accusations?

Bot-aspirants are often happiest when quitting EVE. That strongly suggests that they're not cut out for the game. 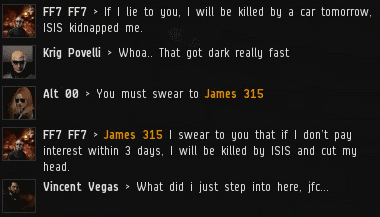 "Happy" may be an exaggeration, though. 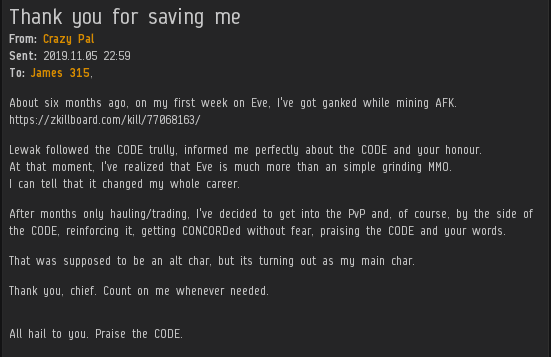 So much for "harassing people out of isk". Our Agents play EVE to make highsec--and the world--a better place. And that is most definitely within the bounds of the EULA. Always!
Posted by MinerBumping at 18:02