Previously, on MinerBumping... It appeared as though aiva naali was reeling from the consequences of spilling secrets about his superweapons in a public channel. Then, without warning, he revealed that it had all been a ploy to manipulate Pandemic Horde.

In the safety and security of a Discord channel, aiva spoke freely about his grand plan. Unlike his previous deceptions, the project code-named "muse" was very real.

aiva was operating several steps ahead of everyone else in nullsec. To make extra money, he planned to sell superweapons that he would then render obsolete by countering them with new superweapons. And why not? The fellow never ran out of ideas.

Unfortunately, there was still the matter of the security deposit. aiva would not be able to join the Imperium in any official capacity until it was paid off.

The background check, conducted by Goons, had been a long and winding road. aiva could scarcely keep track of whether he'd already paid his security fees.

aiva didn't care about money, though. Isk wasn't his priority anymore. He was determined to get a leadership position at the highest levels of the Imperium. In aiva's eyes, that goal was almost within reach. 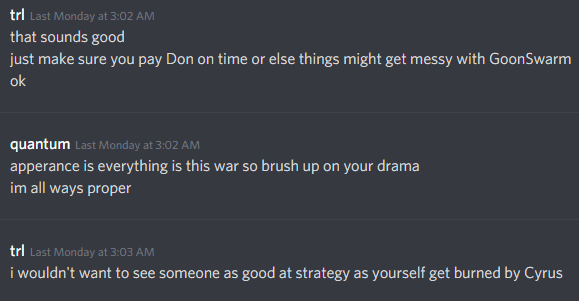 But, again, the money.

For a fleeting moment, aiva considered the remote possibility that he might be handing over billions of isk in exchange for nothing. But if that happened, he could simply take his revenge by dismantling the Imperium.

Finally, aiva received word from someone with the authority to speak on behalf of GoonSwarm Federation. Donatien Alphonse Francois wasn't actually a member of the alliance, but he seemed trustworthy enough.

From the start, aiva's personal finances were shrouded in mystery. On some occasions, he was flush with cash and buying skill injectors like they were going out of style. But on other occasions, aiva appeared to be flat broke, mining Veldspar in highsec with a Venture. Now he owed billions to Donatien and his Goon security team. Yet aiva was confident he could raise the funds within a day.

aiva's debts grew. Was he full of it--or could he deliver?

Sure enough, aiva came through with the isk, right on time. Now he could set his grand plan in motion.

But, again, the money.