As everyone knows, Agents of the New Order don't like to see unlicensed miners mucking about in highsec. And you know who else is offended by the sight of miners? 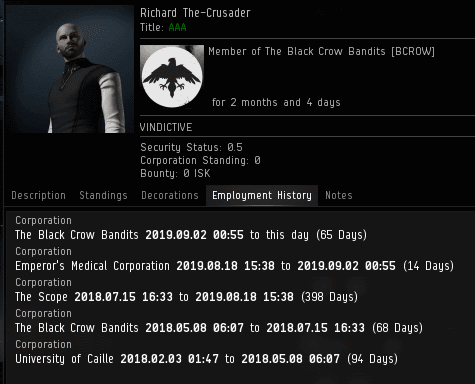 Richard The-Crusader, a bot-aspirant miner whose exploits were covered in the Parental Advisory series, contacted Agent Lewak and asked him to terminate some illegal miners. But judging by Richard's behavior as recounted on MinerBumping, his motives were suspect. Here's a tidbit to refresh your memory:

Even worse, when making his report to Lewak, Richard requested a "finder's fee". Was he still motivated by greed for isk?

Agent Lewak now had two issues to deal with: A report about illegal mining operations, and Richard's attitude. Our hero resolved to handle both matters in accordance with the Code.

Our Agents are not so easily manipulated--and they know not to trust the word of a miner. 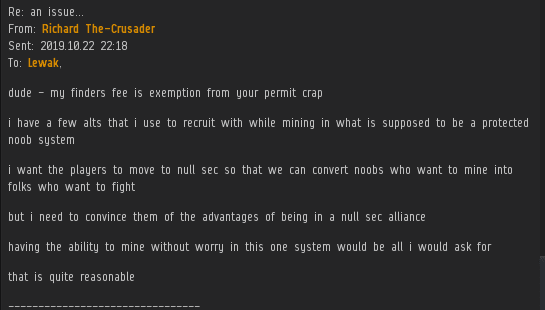 From the moment Lewak uttered the word "permit", Richard was triggered. The very idea that Richard might be required to open his wallet was enough to make him squeal. That said something about him.

Richard's odd ramblings about trying to get miners to go to nullsec proved ineffective. Next he tried bribery.

Agent Lewak was not for sale. But to make absolutely sure he hadn't misjudged Richard's intentions, Lewak name-dropped the Saviour of Highsec. If Richard truly had a bot-aspirant heart, the mention of James 315 would trigger him further still.

Sure enough, Richard was rattled. He confessed to being a miserly rebel.

Lewak concluded that Richard was indeed acting in bad faith. As to the illegal mining operation that Richard reported, Lewak and his friends would deal with it at their leisure. In the meantime, Richard needed to hand over 10 million isk. Would that arrangement satisfy him? 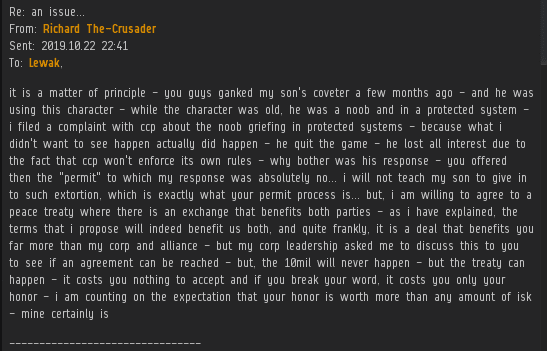 Richard didn't realize it, but he helped our Agent locate a Goofus after all.
Posted by MinerBumping at 18:01