Some assets, such as ships and Mobile Tractor Units, are displayed on killboards when they're ganked.

Other assets, such as 'Augmented' Mining Drones, do not appear on killboards when ganked directly. Yet these blingy drones cost 50 million each, and they are very cheaply ganked due to their low HP. 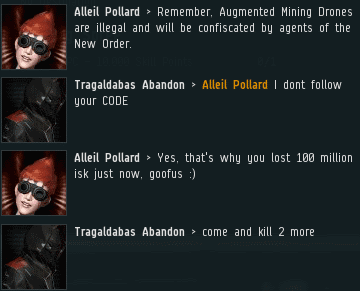 Tragaldabas Abandon lost 100 million isk to one of the countless ganks of blingy drones that occur in highsec. Tragaldabas was in good company; those who use blingy drones attract a lot of attention. In fact, the miner was lucky that he wasn't caught using a full set of the drones, which would have cost him a quarter billion isk. 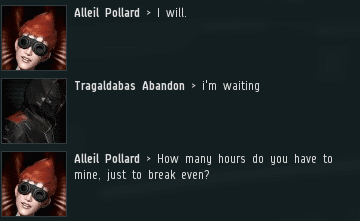 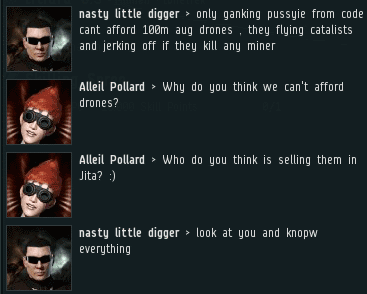 Other miners in the system were disturbed by the incident. They knew that they, too, were economically prohibited from ever using blingy drones in a profitable way. If they tried to use them, gankers would show up and set the miners back days, weeks--or months! 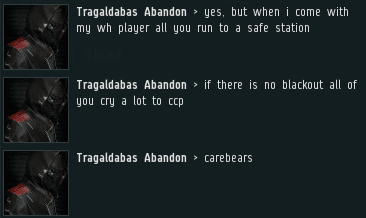 As with so many others like him, Tragaldabas was deeply ashamed of being a highsec miner. He made a brief show of being a wormholer. 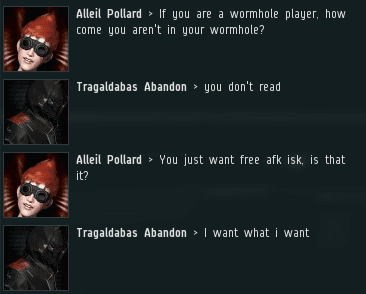 Alas, self-proclaimed wormhole players get little respect from our Agents. If we catch you mining in highsec, we know exactly what you are. 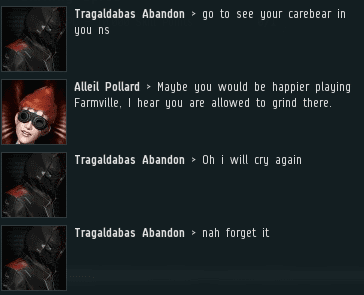 The miner tried to engage in smacktalk, but he quickly gave up. It was pointless, just like his unprofitable mining. 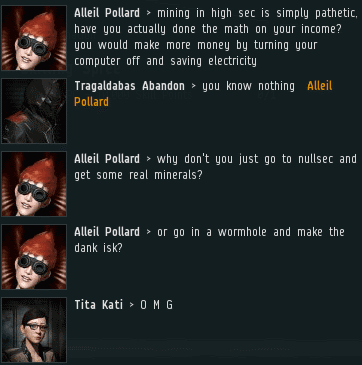 Agent Alleil returned to the subject that had made the miner so uncomfortable. Tragaldabas winced. Deep down, he knew that his choices could not bear scrutiny. 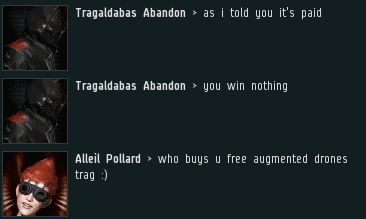 Agents of the New Order are known for shining the light of truth. The light is harsh and powerful. Miners scatter. 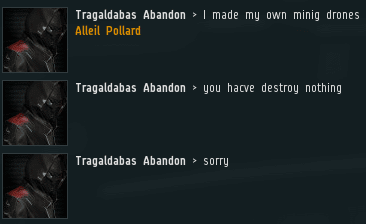 Tragaldabas retreated into the darkness of his own ignorance. If only he allowed the ganker to rescue him from his misery.
Posted by MinerBumping at 18:01