Previously, on MinerBumping... aiva naali's efforts on behalf of the Imperium did not go unnoticed. aiva was delighted to hear that The Mittani wanted him to pilot the Imperium's flagship and lead the coalition's forces into battle. Unfortunately, this would require aiva to buy a very expensive ship.

aiva's colleagues estimated that the price of the flagship titan would be at least 70 billion isk--far beyond aiva's current resources. This meant that aiva would need to become an EVE market tycoon overnight.

Until now, aiva had never been very interested in isk; his primary concerns were military strategy and secret weapons. But once he unleashed his mind upon the subject, aiva quickly began brainstorming ways to get rich.

Of course, aiva's initial plans were highly theoretical. Many of them involved destroying Pandemic Horde's asteroid belts with stealth bombers--a concept that was as yet untested. 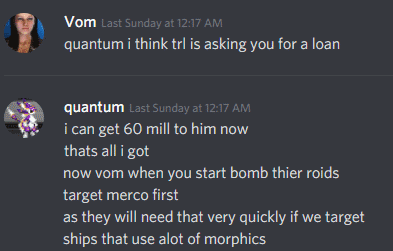 In the meantime, aiva continued to scrape together whatever isk he could. It was slow work: aiva had accumulated just 60 million isk, an amount he was called upon to surrender anyway. 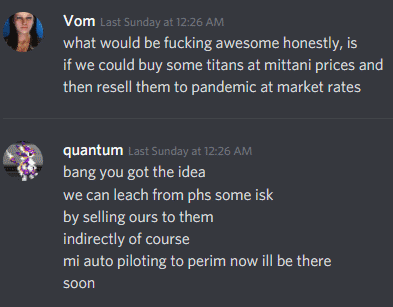 What aiva and his team needed was a shortcut. Agent Aiko Danuja, going by "Vom" on Discord, found one. 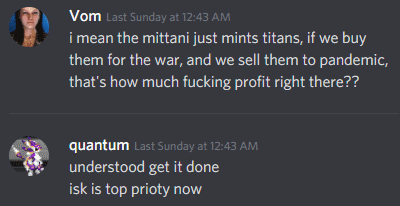 According to Aiko, the Imperium was able to produce titans at a tiny fraction of the original 70 billion isk estimate. Aiko proposed buying titans from The Mittani at this discounted price, and then selling the titans to the enemy. It was a morally dubious proposition--arguably treasonous--but aiva did not hesitate to approve it. 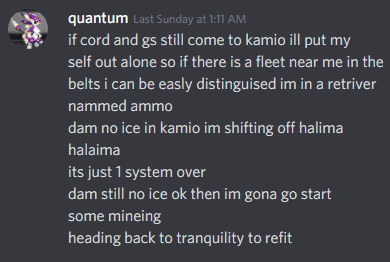 aiva got into the habit of giving everyone minute-by-minute updates on his highsec ice mining activities. (The blessed Halaima system thwarted him.)

After consulting with his friends in the New Order, aiva learned that he could start building a titan after paying them just 3 billion isk. It was a great relief; aiva was far more optimistic about his ability to gather this sum. 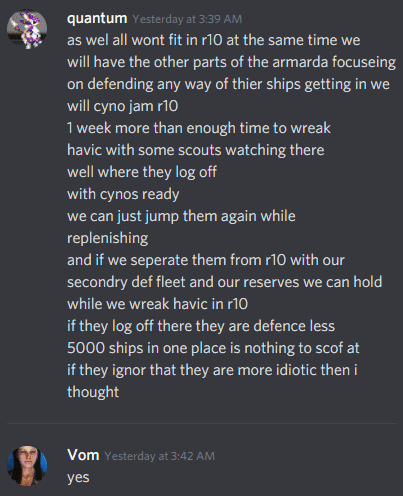 When not engaged in mining or writing status reports about mining, aiva drew up battle plans for the Imperium. No one could find any fault in them. I mean, this is aiva we're talking about. 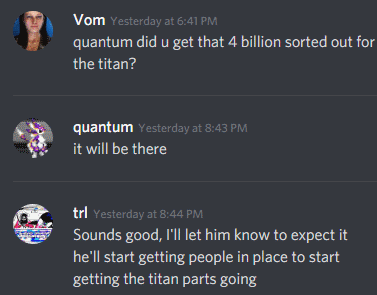 Aiko and company were more interested in getting status reports about aiva's wallet, however. The 3 billion isk estimate had been revised to 4 billion, but aiva was confident he could obtain it. 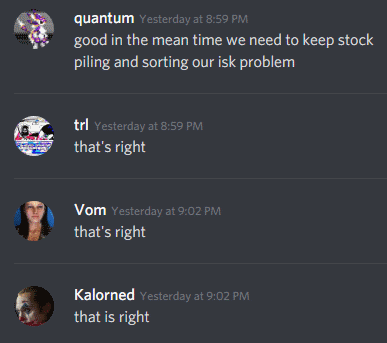 Once they had the funds, the Imperium's titan builders could begin work on aiva's flagship. It would be a sight to behold. 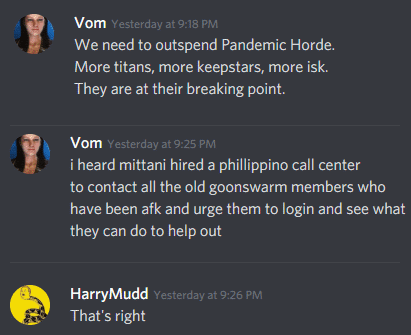 Now was the time to be aggressive, both financially and militarily. If the Imperium struck while the iron was hot, Pandemic Horde would surely be defeated.

Before long, aiva managed to get 5 billion isk, which he immediately paid into the titan fund. Victory was on the horizon.