When an Agent of the New Order enters a system, it is a glorious moment--one worthy of being announced to all. 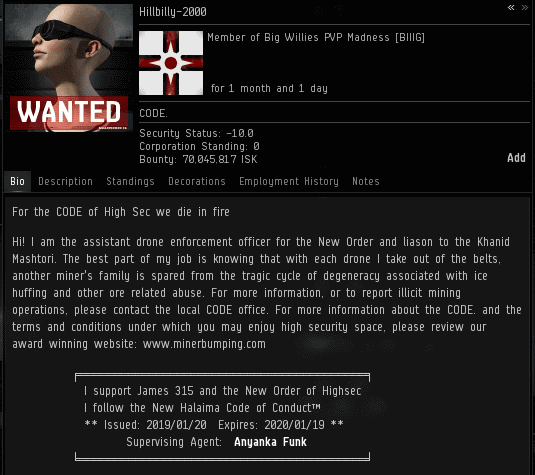 Gankers who maintain sufficiently negative security status get the privilege of having their presence trumpeted by the EVE client itself. In addition, salty miners sometimes herald the presence of gankers to everyone in local chat.

Hillbilly-2000 and fellow Agents Daystalker 2020 and Zor Q entered the Isanamo system to much fanfare.

Baroo explained why he hated Hillbilly-2000 so much. As is usually the case with these greedy little miners, it was all about money.

Oh, and the miner was deeply concerned about subscription retention rates, too. 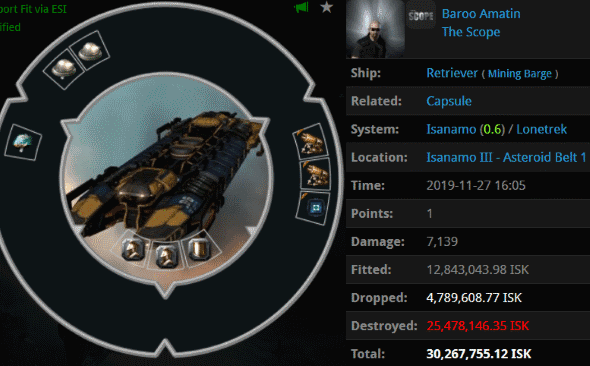 Retriever pilots are arguably the saltiest breed in highsec. Sure enough, Baroo had lost a Retriever, as well as a relatively cheap pod. In all, the miner lost 65 million isk.

Honesty does not come naturally to the highsec miner. They tend to inflate or deflate the amount of their losses, depending on their agenda.

Everyone in the Isanamo system witnessed Baroo's embarrassing display. Agent Hillbilly-2000 didn't want a spectacle, but he knew that if he invited Baroo to discuss the matter privately, he might be accused of a lack of transparency.

It didn't have to be like this. Baroo could've allowed Hillbilly-2000 and friends to reform him--to make him a better miner and a better man. Baroo blindly rejected the lifeline.

For a moment, Baroo hoped that CCP might be his salvation. But he quickly decided that he hated CCP, too.

Finally, Baroo came up with a plan of vengeance: The miner would appeal to the goodwill and generosity of Jita local.

It was a dumb plan.

Baroo ended his day as a Goofus. Nevertheless, there is still hope for Baroo. After all, there's always the next gank.
Posted by MinerBumping at 18:03