Tugging at the Hems of Power, Part 7

Previously, on MinerBumping... Tension was rising in the Gamis system. Tug Industries Corporation grew to hate Agent Kalorned for his bumps and his Code. Kalorned tried to get the miners to calm down, but they refused to see reason.

The miners demanded satisfaction, but Kalorned chose not to engage in any duels. He felt that defeating the miners in a series of duels would only fuel their rage.

Our Agent attempted to defuse the situation by pretending to be docked. But the Tug Industries pilots were monitoring him closely, and they knew that Kalorned was still merrily bumping miners away from the system's ice anomaly.

Kalorned knew it was getting serious when Folg3r Tinlan called upon his ancestors. That's usually a prelude to violence.

The moment had arrived.

Tug Industries had surrounded Kalorned's Orthrus, which was bumping an Orca. The carebears periodically locked Kalorned. But would they have the guts to pull the trigger? 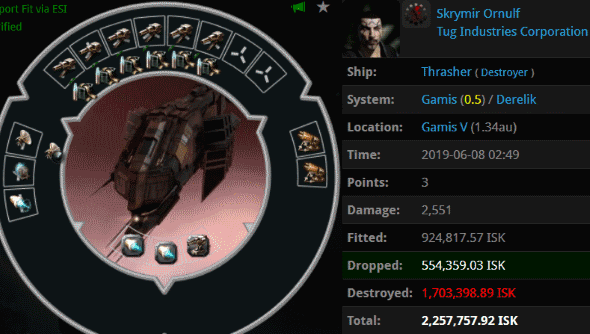 Shots rang out. A gank Thrasher opened fire on Kalorned, only to be CONCORDed.

The miners had coordinated a suicide gank in the proper manner, throwing multiple gank-fit destroyers into a simultaneous attack. Two more Thrashers were CONCORDed immediately after the first. However, the three destroyers lacked the DPS needed to take down an Orthrus.

Then came the madness. 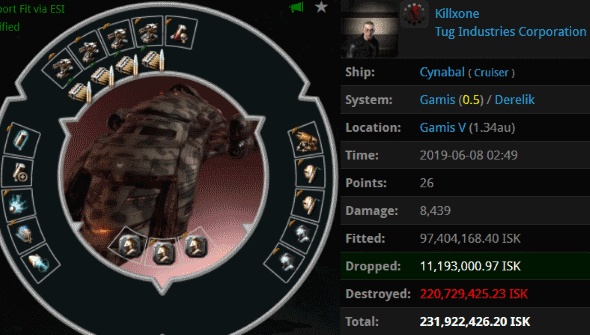 Kalorned could scarcely believe his eyes as he watched a member of Tug Industries attempt to gank him using a Cynabal! Nearly a quarter billion isk was lost as the pilot's armor tank failed to withstand CONCORD.

The insanity of the carebears multiplied: A second Cynabal was also lost to CONCORD. It, too, had relied upon an armor tank.

In all, three Thrashers and two Cynabals were lost in the crazed attempt on Kalorned's life. But the bumping Orthrus could not be beaten. Our Agent held the field. 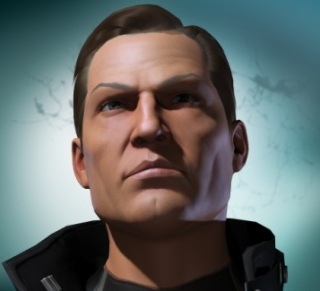 Kalorned didn't know about his ancestors, but he was confident that there was indeed a face smiling upon him that day. 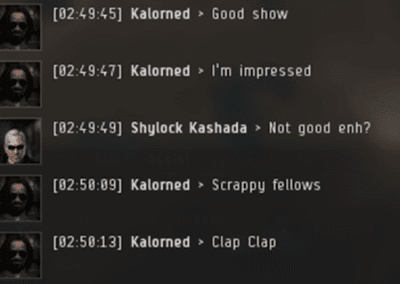 Our Agent was magnanimous in victory.

...But the miners only embarrassed themselves in defeat.

Grasping in vain for a silver lining, one of the Cynabal pilots noticed that an Orca had fled the ice anomaly and docked up while Kalorned looted the gankers' wrecks. At least now the Orca would be able to not get bumped while it was busy not mining. But was it worth the half-billion isk in losses? The war against Kalorned was growing costly.