Ah, the war of the Code versus the bot-aspirants. 'Tis the story of EVE.

If one were to consider the wars conducted through the in-game wardec system, however, it would be hard to find a war to rival that of Red versus Blue. The wardec's seventh anniversary is next month. But things have changed radically since RvB's early days. 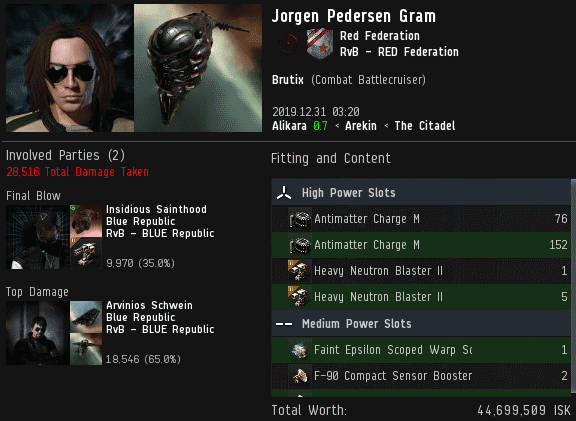 RvB has fallen in activity over the years, particularly where Red-on-Blue or Blue-on-Red violence is concerned. Kills between the two groups are infrequent, especially considering the purpose of the two organizations.

Red member Jorgen Pedersen Gram lost his Brutix when he challenged a pair of Blues to do battle. The reaction of the Blues was mixed.

While Insidious Sainthood showed good sportsmanship, Arvinios Schwein did not. He had been disturbed by the encounter. Maybe he didn't want to be interrupted while mining in his Orca? 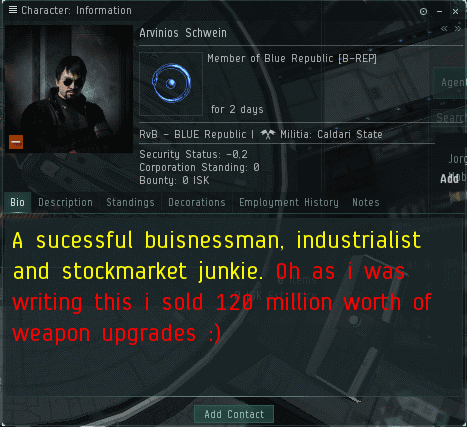 Arvinios represented the worst of RvB. He didn't care about fun. He just wanted a tax shelter for his highsec carebearing. Did he even know the history of the RvB war?

Several hours later, Jorgen Pedersen Gram returned to the system and found Arvinios mining again. This time, Arvinios didn't have Insidious Sainthood to help him. And that made Arvinios change his tune.

Arvinios' call for Blue reinforcements to be sent to the Alikara system went unheeded--perhaps because he made his pleas in Alikara local chat.

The mouthy miner cowered in fear. He immediately offered to pay a ransom to save his Orca.

Arvinios paid the first installment on the ransom, but something went awry.

Jorgen required an additional payment of 50 million isk to release the Orca. But Arvinios' greed threatened to scuttle the deal--and cost him his Orca.

The Orca's hitpoints continued to tick down while Arvinios tried to summon the willpower to part with another 50 million isk.