I often speak of New Order shares and the diversity of motives behind our noble shareholders' purchase of them. Here's another good reason to buy shares: the calendar.

zyk0 is right, by the way--it's going to be a big decade for the New Order. 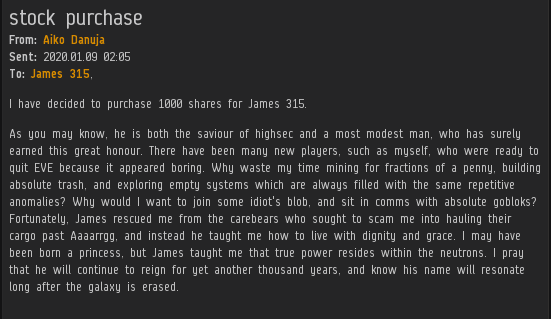 As you can see, Aiko Danuja thought carefully before purchasing 1,000 additional shares in the name of James 315; 'twas no spur of the moment thing. I say "additional shares" because, as perhaps few people know, Leia Jadesol previously gifted me 315 shares many moons ago.

Aiko made some other unorthodox purchases this week, including a purchase on behalf of "chamomile tea" for 315 shares, which happened to take us past the 2,021 billion isk mark and earned the famously calming drink a Supreme Protector's Tip of the Hat™.

I don't often get Korean tearmails, but this one translates roughly to "Don't mess with Eve Don't bully the newbies". The assertion here is absurd. In point of fact, there is no evidence that the New Order picks on new players. Quite the opposite: Newbies who obey the Code are no more likely to be ganked than old players who obey the Code. And those who disobey the Code are doomed regardless of their age.

Some additional backstory behind gank recipient sanvely's tearmail was revealed with the aid of Agent Aiko, who forwarded me a link to a Twitch stream:

The streamer almost sent me a profane EVEmail before sending her outrageous accusations of newbie-bullying instead. Alas, we have no Korean translation of the Code to give her. In this era of Pearl Abyss, acquiring such a translation from a fluent Korean speaker must become a higher priority.
Posted by MinerBumping at 18:01