Arvinios couldn't believe the way he was being treated by a member of the corp specifically created to be at war with his own. If Jorgen didn't stop shooting Blue, he would surely be kicked from Red.

Jorgen had pity on the crusty old Orca pilot, so he decided to release him once the remaining 50 million isk ransom was paid.

Arvinios coughed up another 50 million, but in the last moments of his Orca's life, he foolishly admitted that he had been lying about his wealth. 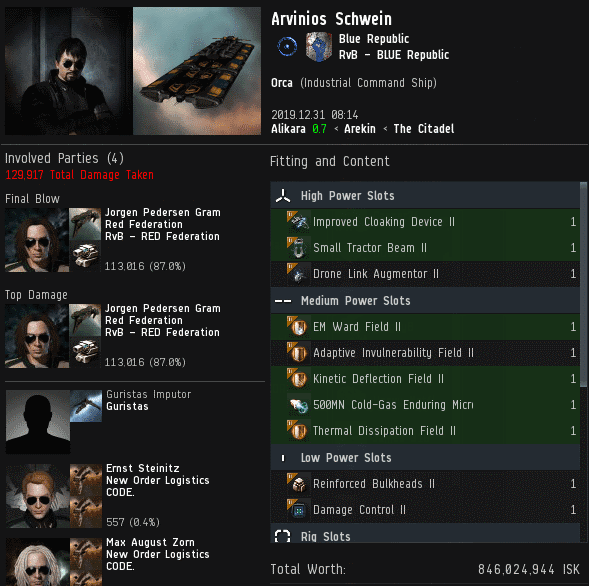 And so Arvinios's Orca was destroyed. It turned out that Jorgen had a few friends from the mighty CODE. alliance; they chipped in just enough damage to get on the killmail.

Arvinios couldn't believe what had happened. Jorgen had shot his spaceship in a spaceship-shooting game. And Jorgen had only been paid 100 million isk and scooped another 100 million in loot. What on earth was his motive?

The Orca pilot boasted that he could console himself with his billions. But would the isk--real or imagined--actually help him calm down?

Suddenly, a plot twist. Jorgen's words rang out like a gunshot.

Jorgen was no ordinary Red. He was loyal to the Code.

Arvinios was shaken. If the miner couldn't understand engaging in PvP for fun or money, doing it for the Code was even further beyond his comprehension.

The phantom billions disappeared from Arvinios' mind. He wanted answers. Luckily, he had an idea of where to get them.

Agent Ernst Steinitz had appeared on the Orca killmail. So Arvinios went to him, hat in hand.

The miner, once so proud and arrogant, humbly begged Agent Ersnt for 100 million isk. But Arvinios' crimes were too well documented for his reimbursement claim to be entertained. 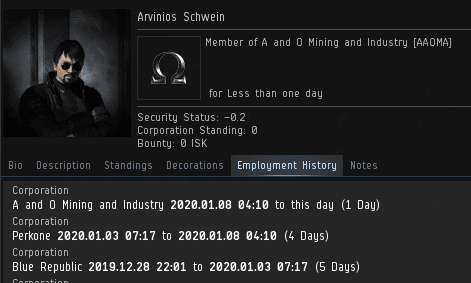 After thinking it over, Arvinios realized that RvB wasn't right for him. He would try his hand at a mining corporation. But as long as the miner was in highsec without a permit, danger lurked everywhere.
Posted by MinerBumping at 18:04