The Test of Wisdom, Elonaya Edition

The New Halaima Code of Conduct has specific protocols about how a challenger can arrange to duel me. When miners get angry, and when they discover my Invincible Stabber lacks weapons, they often bring out their most prized PvP ship and demand a 1v1. In previous posts, we looked at how challengers in Uotila and Kamio fared. In both instances, the challenger invoked the Test of Wisdom, and failed. Today we'll see if the latest challenger, hailing from the Elonaya system, did better. 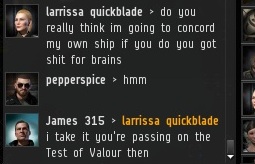 larrissa quickblade brought her beloved drake into the ice field of Elonaya and insisted on dueling me for the honour of the system. I guided her to the 1v1 provisions in the Code, but she balked after learning what the process entailed. 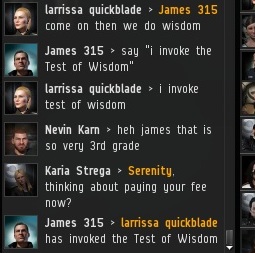 Like most challengers, larrissa finally settled on the Test of Wisdom. 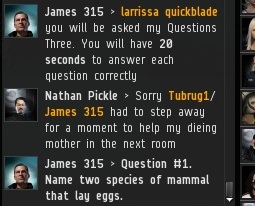 Though interrupted by Nathan Pickle's delivering a self-serving, unverifiable excuse for going AFK while in the ice field, the Test of Wisdom went on. No questions about rivers today. The subject for the first question was zoology. 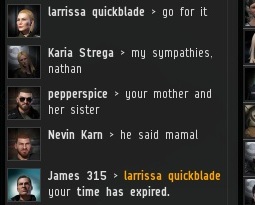 Sadly, larrissa quickblade did not live up to her name, and she failed to answer the question during the allotted time period--or during any time period, for that matter. 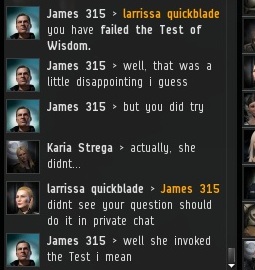 Whenever someone has the courage to challenge me to a duel and invoke one of the three Tests, I give that person some credit, even if the Test is failed. They're still winners in my book, though technically I suppose they're losers. 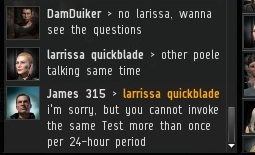 larrissa began making excuses for why she failed. There's always an excuse. Why don't people take responsibility for anything anymore?

Being a graceful loser is a test in and of itself. Some accept defeat with dignity, while others lash out in anger. I find myself a target of this displaced hostility more often than not.

Clearly, larrissa's idea for improving the Code was a faulty one, subject to all kinds of abuse.

At the end of the day, larrissa didn't get the opportunity to test out her drake. It's just as well, for it surely would have been destroyed by my Invincible Stabber. Another duel won without firing a shot.
Posted by MinerBumping at 17:11