Good and Evil in New Eden

I am a bit of a polarizing figure in the EVE community. People either love me or hate me. I take comfort in the fact that the best people tend to love me, while the worst people tend to hate me.

Out of nowhere, I received an EVEmail from Throckmorton. I had never encountered Throckmorton before, so I was intrigued by the passionate emotions he felt toward me. 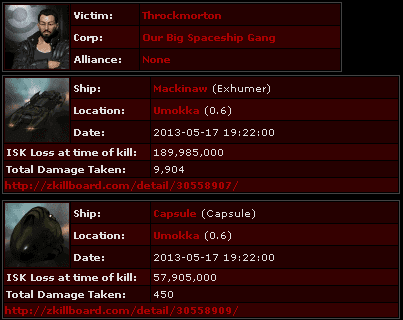 As I suspected, Throckmorton was a highsec miner. Two days earlier, a gang of Knights dealt justice to him. I don't know why it took him two days to send me a one-line EVEmail. I'm also baffled by the fact that he called me "greedy". Aren't highsec miners the ones whose "gameplay" in EVE is centered around the acquisition of wealth?

Agent Fawn Tailor, one of the Knights on the killmail, also received an EVEmail from Throckmorton--oddly, an entire day after he sent me an EVEmail. I was a bit surprised that he contacted me before contacting the people who exploded his ship. 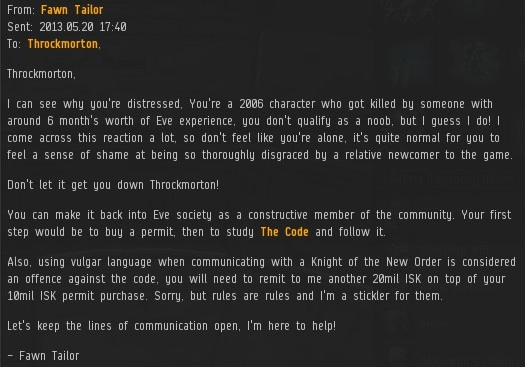 Throckmorton replied. If he wanted to get away with his crimes, he shouldn't have sent it; he incriminated himself further by revealing he was unaware that anyone was ganking miners in highsec. How bot-aspirant is that? 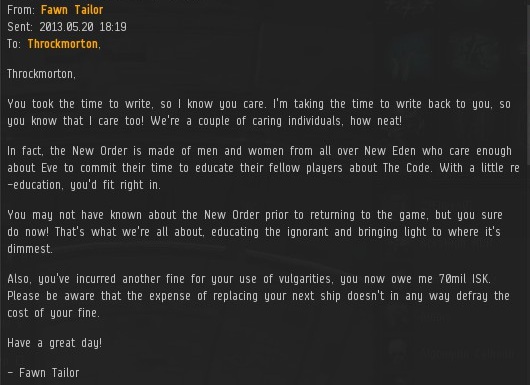 Going back to where I started, note once more the contrast between Fawn Tailor and Throckmorton. You can easily see who the good guys and the bad guys are. The Goofuses and Gallants of EVE make themselves known by their conduct. Is it any wonder that the residents of highsec are flocking to the New Order?
Posted by MinerBumping at 19:29