In the mood for some Kills of the Week? Like it or not, that's what you're going to get. The following were some noteworthy suicide ganks performed by the New Order during the week of May 12 @ 00:00 EVEtime through May 18 @ 23:59 EVEtime. 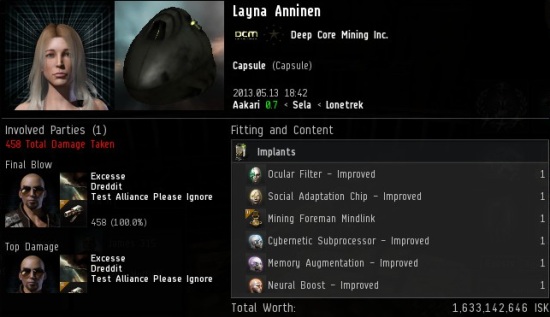 Let's get the week's podmail out of the way: Layna Anninen lost 1.6 billion isk worth of implants thanks to Agent Excesse's quick thinking and steadfast resolve. Layna's implants were protected by her Mackinaw, but Agents Lord MuffloN and Excesse thoughtfully removed it first. Capsules may be my favorite vessels to destroy in this game, because you just never know what you'll find inside. They're like Easter egg-shaped Easter eggs. 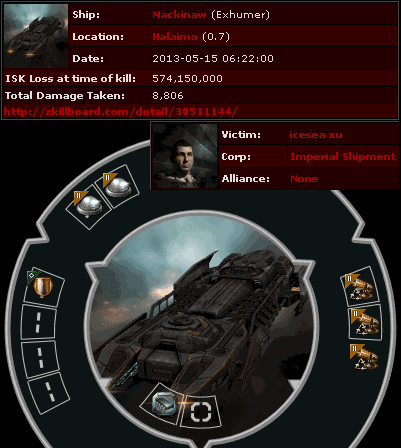 KILLMAIL
This week's theme for dead mining ships is big, bigger, biggest. We begin with icesea xu's 574 million isk Mackinaw, popped by Agents Capt Starfox, Agrona Martin, Gavin9012, Gavril Ilizarov, Dante Lobos, and Ledrian Saisima (who was in a Merlin for some reason). icesea xu's Mackinaw fitting fascinates me. He spent all that money on exactly one tank mod, but left the rest of his midslots empty. This brings to mind the question posed by a famous philosopher: "What in the HELL are you doing?" 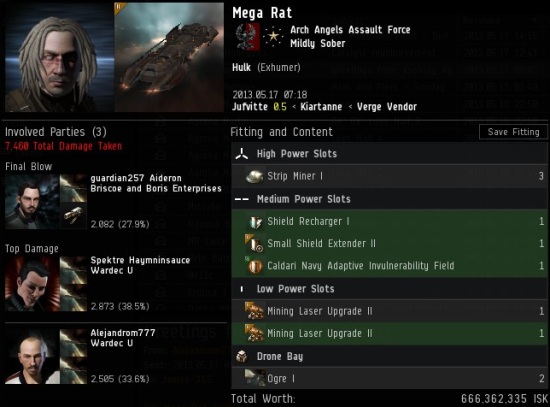 Next we have Mega Rat's beastly 666 million isk Hulk. Agents guardian257 Aideron, Spektre Haymninsauce, and Alejandrom777 learned that Mega Rat was living up to his name by mining in highsec without a permit, so they put an end to him. And now for the crowning achievement of the week... 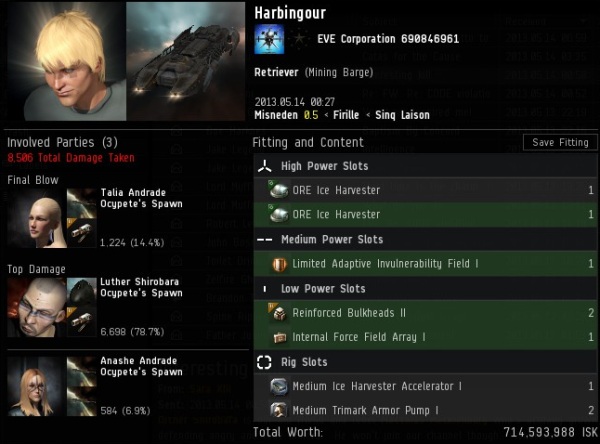 The numbers don't lie: Harbingour went boom while flying a record-shattering 714 million isk Retriever. Agents Talia Andrade, Luther Shirobara, and Anashe Andrade surely earned their stripes with this kill--and the gratitude of the highsec community. Harbingour apparently stuffed whatever tank mods he had on hand into the limited slots available to his ship. Because going around in a totally untanked 714 million isk Retriever would have been really stupid.
Posted by MinerBumping at 19:52