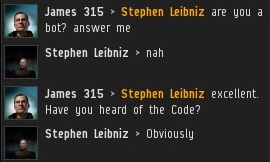 In the days before the New Order, most miners had no idea that they could be bumped out of mining range. These days, we're dealing with a much more educated public. 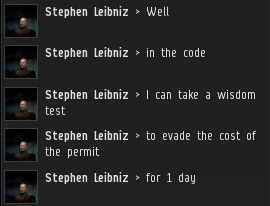 After removing Stephen Leibniz from an ice field in Osmon, he cited an obscure provision in the Code. I was impressed, because the provision in question is virtually never used. 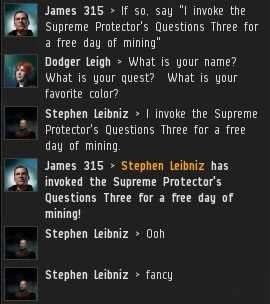 Several people have invoked the Test of Wisdom to earn the right to a duel, but few know that it can also be used to earn a 24-hour mining pass. 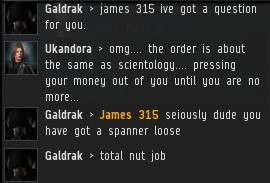 Osmon local was transfixed by the upcoming contest, but some found it frustrating, because it meant miners were buying into "the system". 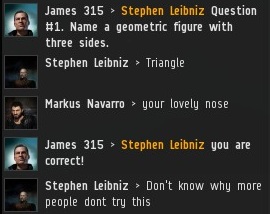 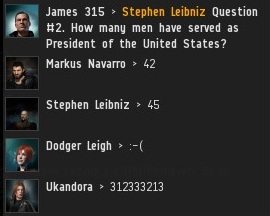 As usual, the second question was more challenging. Stephen took a stab at it. But had his luck run out? 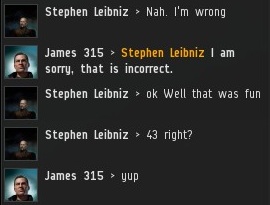 Sadly, Stephen was off by a few. To this day, no one has succeeded in correctly answering the Questions Three.

Some miners have honour, even if they have not yet embraced the Code. Stephen conceded defeat and gracefully took his leave. A class act.

...And then there are the miners who lack honour. Markus Navarro, trembling, could barely spit out what he was trying to say.

The local rebels became divided. Some supported Markus' claim that 42 men have served as U.S. President; others encouraged their fellow miners not to buy into the Questions Three apparatus at all. 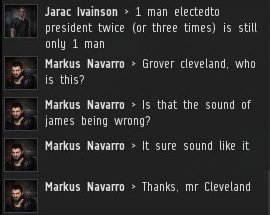 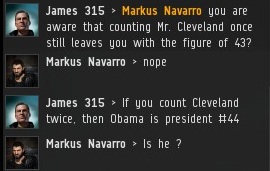 Slowly, doubt began to creep in. 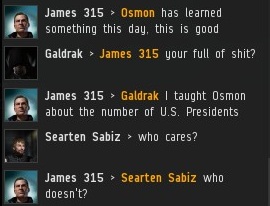 In the end, the rebels had to admit that they were wrong and I was right. The integrity of the Questions Three was upheld. Galdrak promoted the idea of blocking me, even though clearly he had not blocked me himself. This happens more often than you might think. 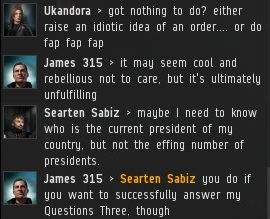 Now more than ever, a good education is important. Specifically, it's helpful for a miner to be able to answer random trivia questions I ask.

Here's to a happier, healthier, more enlightened highsec!
Posted by MinerBumping at 20:08