Aside from when I was a scammer, I have always made my isk the old-fashioned way, through good, honest, hard work. Everything I own in EVE has been earned by the sweat of my brow. 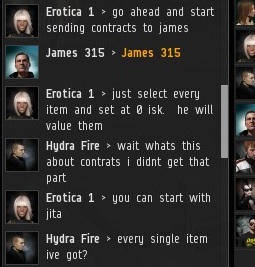 EVE is a diverse place, and the New Order reflects that diversity. Not everyone comes from my simple, down-home background. Agent Erotica 1 occasionally invites me to take a trip into her glamorous, fast-paced world of isk doubling. 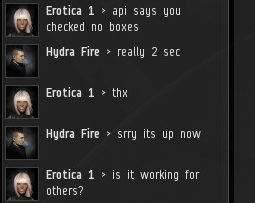 Erotica recently asked me to assist her in handling a client, Hydra Fire. Though she handles a lot of isk directly, she sometimes uses escrow agents to handle contracts. I had a few spare moments, so I served as an escrow agent for Hydra. 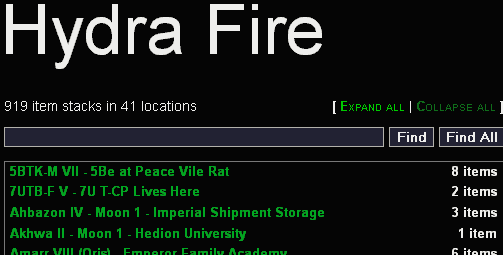 After he gave us a full API, I was able to see all of his in-game assets, which enabled me to keep track of the possessions he was sending to me via contract. 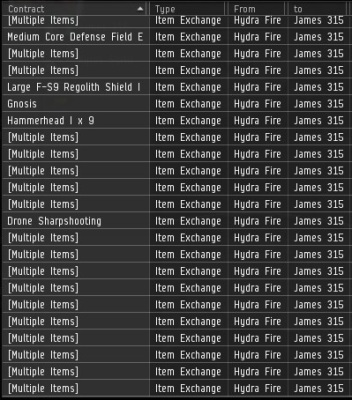 And there were a lot of contracts to keep track of; Hydra was assigning me his assets at several contracts per minute.

I gave the New Order crew a few updates as we went along. 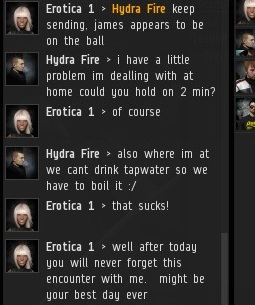 Although the rapid-fire contracts weren't the kind of work I was used to, I was determined to prove that I was capable of handling whatever job the sophisticated, urbane Jita set could. 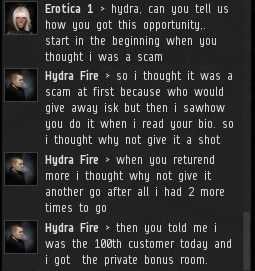 Hydra Fire gave me the backstory. He had met Erotica during a layover in Jita, and he was impressed by her isk doubling talent. He sent a larger sum of isk for doubling, expecting an even bigger return. To his great fortune, he instead received a special invitation to the Bonus Room. He was Erotica's 100th customer!

Hydra had the chance to multiply his wealth dramatically. But such a reward demanded the ultimate demonstration of faith: He was required to hand over everything he owned. 100% trust was mandatory. 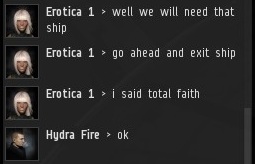 After emptying all of his station hangars, he exited his frigate and contracted it to me, as well. 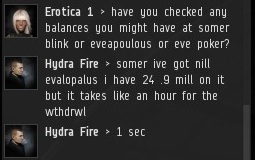 Erotica remembered that many EVE players partake in gambling sites. Hydra had already struck out at the Somer Blink tables, but he had a little isk left in Evealopalous. 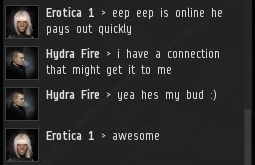 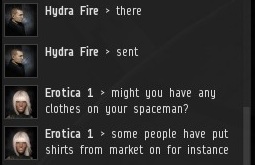 Hydra was down to a last little bit of isk, just enough to allow him to pay the contract creation fee. 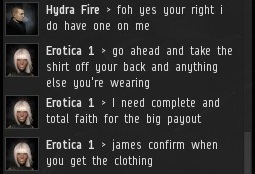 Erotica was surprisingly thorough. I wouldn't have even thought to ask about EVE gambling balances or clothing. 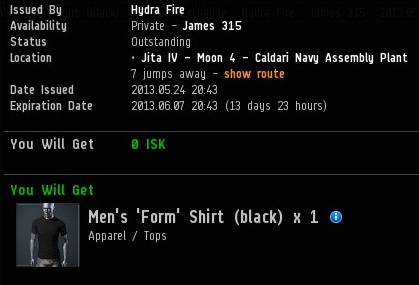 Hydra complied with the terms of the deal by giving me everything he owned, even the shirt off his back. So far, so good. Hydra appeared to have total confidence in Erotica. Maybe these Jita folk weren't so bad after all. But my brief trip into the world of high finance was about to take a dark and unexpected turn.

To be continued...
Posted by MinerBumping at 20:30