Rage of the Russian Renegade, Part 2

Previously, on MinerBumping... I encountered a Code violator named Mirion Renegade in an asteroid belt, so I bumped him away. Feeling entitled to the ore despite lacking a mining permit, he flew into a rage. I was determined to bring him back to reality, kicking and screaming if necessary. 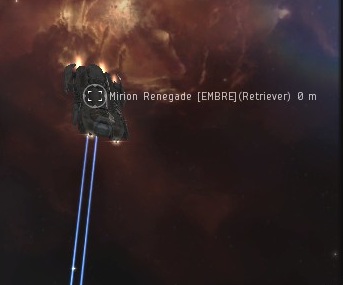 Just when I thought we were making progress, Renegade crept back into the asteroid belt and began mining again. No problem: Bumpers have infinite ammo.

Renegade struggled to communicate how he felt about the second round of bumping. I agree that I am like a torch in many ways--a shining light in the darkness. Though I'm not sure if we were on the same page with that comparison.

No organization in EVE has half the transparency of the New Order. One of the benefits of doing what we do out in the open: Our actions teach a lesson to the miners that we directly interact with, and provide demonstrations to local bystanders. 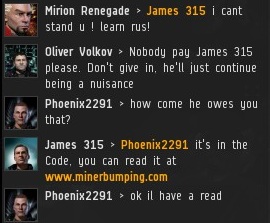 Just like that, another victory for the New Order. Multitasking.

Renegade called for a halt to the bumping as he presented me with some evidence. 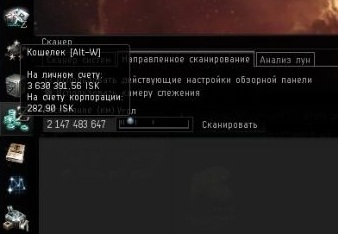 According to the screenshot, Renegade only had 3.6 million isk in his wallet. However, I could see with my own eyes the Retriever he was flying. If he sold it, he would have 10 million isk for a mining permit, plus some money left over to buy shares in the New Order. 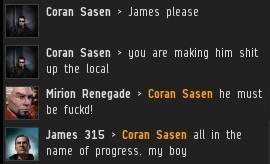 Renegade wouldn't listen. Trying to reign him in was like getting an unruly dog into a bath. 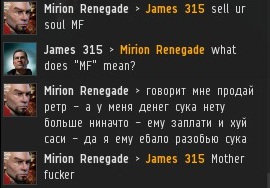 Renegade relapsed into his native tongue. Google Translate says: "tells me to sell retriever - and I have no more money bitch ninachto - he was paid and dick Susie - yes I'll break him fuck up bitch" 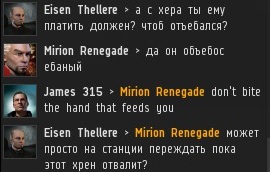 His cry for help attracted the attention of another Russian in local.

As Renegade conspired with his fellow countryman, I found allies of my own. 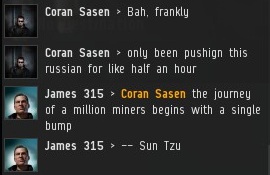 So far, a stalemate. Renegade wasn't getting any of his Code-violating mining done, but he wasn't willing to serve the Code, either. The war of words was taking its toll on both sides. And I had a feeling our journey had only just begun.

To be continued...
Posted by MinerBumping at 18:56