How to Strike a Spark 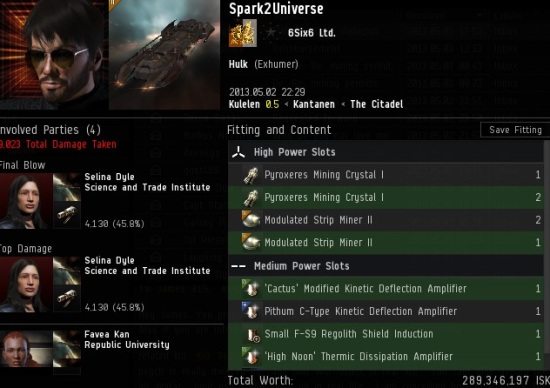 Highsec miners often get the impression that many EVE players don't give them a second thought, that people are indifferent to the miners and don't care about them one way or the other. One thing that I think miners really appreciate about the New Order is that we care. By our actions, we show that we're concerned about the miners on a personal level, and we get involved with their EVE experience at a visceral level.

Other gankers hit and run. We don't. To an Agent of the New Order, the destruction of a miner's ship is merely the beginning of the conversation. Agent Selina Dyle started talking with Spark2Universe after killing him. Spark questioned the honour of the act. Agent Selina informed Spark that the New Order is all about honour, and that Spark had committed a criminal offense by mining without a permit. From there, the two embarked upon a journey of mutual discovery. 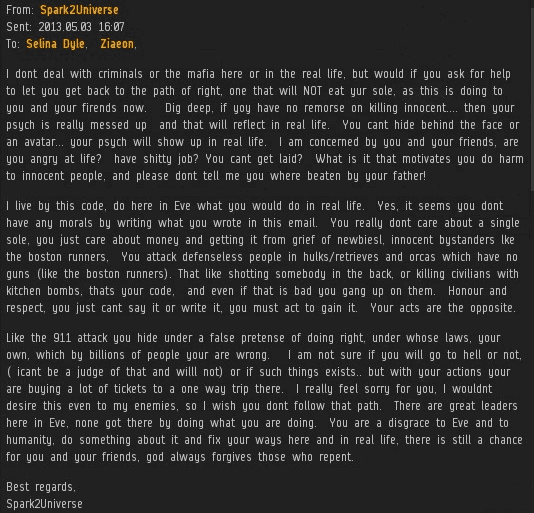 It quickly became clear that Spark was the kind of miner who likes to blame the victim. Anyone who has read the Code knows that my Agents and I are the heroes of EVE; it's the thousands of highsec miners who want to be left alone who are the villains. Agent Selina attempted to make this point, but Spark wasn't having it. 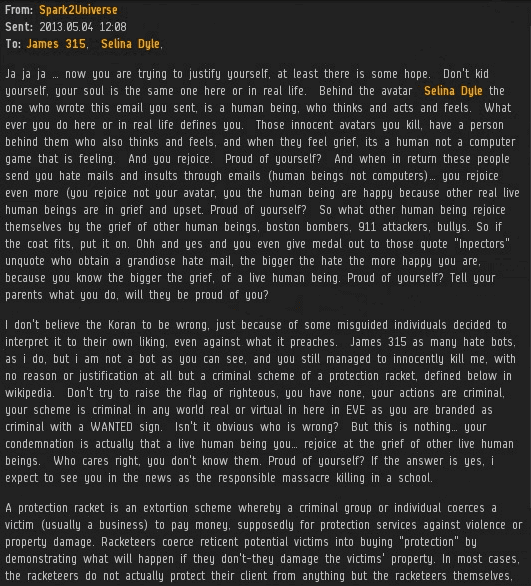 Spark and Selina exchanged a few EVEmails on the subject of whether EVE is a computer game, and whether it's immoral to shoot mining spaceships. To press home the point, Agent Selina put a bounty on Spark2Universe, which made Spark "WANTED" in the context of the game. Had Spark therefore become the very kind of criminal he claimed didn't belong in EVE? 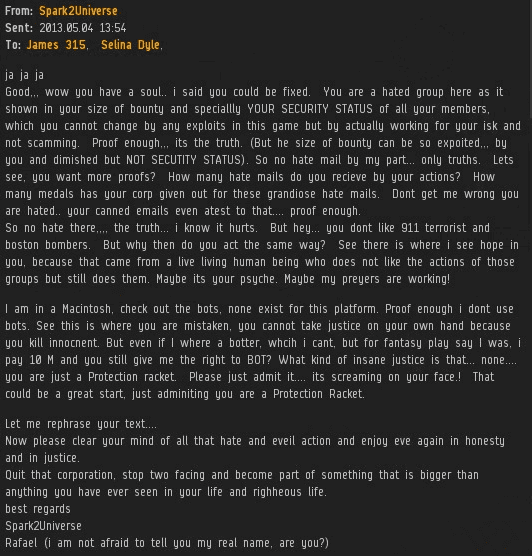 The seeds of a strong friendship were being planted. Spark revealed that his real name was Rafael, and Agent Selina reciprocated by revealing her own real-life name, which is Sarah Palin. Still, she wanted to see some kind of proof of Spark/Rafael's honour, so she repeatedly requested it. 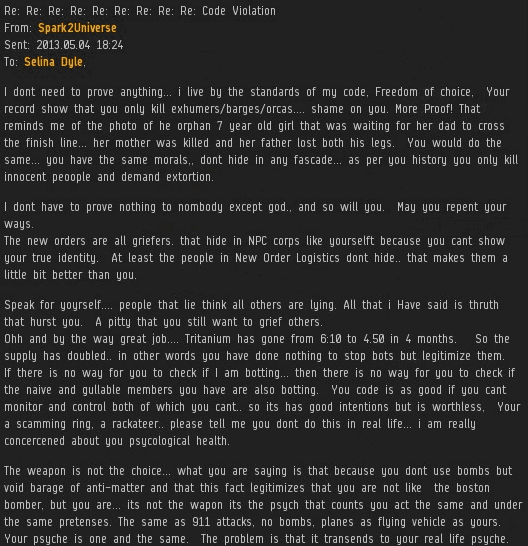 In the end, the two were able to come to a tentative understanding. They agreed to disagree on some of the issues they had discussed. Spark2Universe would continue to violate the Code and base his mining operations on the principles of the U.S. Constitution. For her part, Selina Dyle would abide by the the principles set forth in the Code, which meant she would attack Spark whenever she felt like it. Yet the work of the New Order is sometimes like a relay race: One Agent may pass the baton to another. Perhaps other Agents will take up the cause and help Spark2Universe find his way.
Posted by MinerBumping at 01:46