The Mine Teck Negotiations, Part 7

Previously, on MinerBumping... After several weeks of negotiations, Mine Teck started to lose hope of making peace with the New Order.

He was continually frustrated by the fact that a New Order shareholder vote had yet to be initiated. 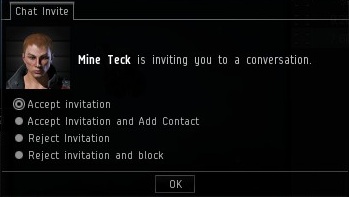 Each time I logged into the game, a new Mine Teck convo on the subject was inevitable.

Although they hadn't worked in the past, Mine Teck stuck to his hardball tactics: Threats to join the resistance and a bunch of arbitrary--but specific--deadlines. 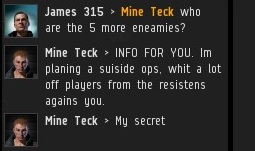 Things were getting serious. If a deal wasn't reached within 3/7ths of a half-fortnight, a devastating suicide attack would be launched against the New Order. Obviously I couldn't let that happen.

I went into full Jack Bauer mode, trying to learn everything I could about the impending attack.

Jack Bauer makes it look easier than it actually is. I had barely narrowed down the threat matrix when Mine Teck decided to end the convo instead of giving me actionable intelligence. Just like that, my only lead was in the wind.

Within the hour, I received an EVEmail from Mine Teck. I'm not sure whether he's saying I need to pay him two billion isk, or that the resistance offered him two billion to join them and I needed to beat their offer. To be safe, I didn't do anything.

Several minutes later, Mine Teck threatened to send an EVEmail to everyone in the New Order, complaining about the lack of a shareholder vote. He made good on his threat; Agents all across highsec reported receiving this exact EVEmail. 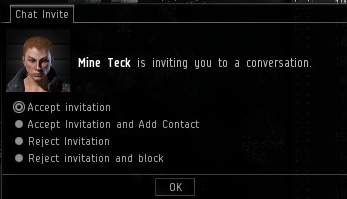 Mine Teck's deadline passed, but thankfully, no suicide attack occurred. 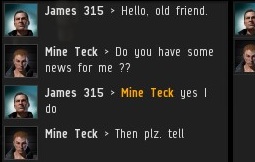 Mine Teck's patience was gone. He wanted to hear something, anything, about progress on the promised shareholder vote.

I lightened the mood a bit with a bit of traditional New Order humor. We always win, so there's never any bad news.

I unveiled some extraordinarily good news, informing Mine Teck of the New Order's continued existence and all that it entailed for highsec's future.

As ever, Mine Teck was a dark cloud looming over the party. He refused to share my optimism and announced himself for the resistance. Classic Mine Teck.

With that, Mine Teck ended the convo.