Rage of the Russian Renegade, Part 4

Previously, on MinerBumping... Renegade miner Mirion Renegade and I engaged in a pitched battle over whether or not he needed to follow the Code before exercising his highsec mining privileges. Everything was fine until Mirion escalated the conflict by petitioning me.

Mirion posted a link in local to a screenshot he uploaded. He wasn't joking about the petition. 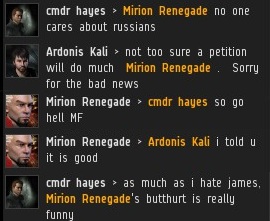 Mirion's attempt to get the GMs involved was surely the nuclear option. To his surprise, it didn't win him any friends.

Because the screenshot was an image, I couldn't just drag the text of his petition into Google Translate. I so rarely get to see the contents of carebears' petitions against me; I asked Mirion to copy and paste it into an EVEmail.

Mirion did me a solid and sent over the text. (I'm guessing his petition had a different subject line, though.) The following is the Google Translate version of Mirion's petition. For ease of reading, I have split it into paragraphs and added some punctuation--luxuries the Russian GMs did not get to enjoy.

Daras, prikopalis to me one of the pilots of James 315 accuses me of using bots, and throws a belt. I never used a bot how much I tried to persuade him not, a beautiful game and I please enjoy it. So happened that I had no money left for anything, that's I stand on it and undocking me again bumping bitch, I really want to spit on the game and punish him in the face.

I'm mining, in chat rooms and talk to me about what it is that the rules. I rubs him explain that I have no money - threw a screenshot showing the status of my balance - it is ignored. That is, to earn the money I need sell last ship - to give to him and start again from the beginning? Fuck yes to him in the nose!

I ask forgiveness for mats - emotions... Here at least you tell me why - I - do not botovod must obey and do not adhere to the rules and that the rules of the agreement are then left really! He did not ask me not requested in touch with me I'm stuck in a heap of other chats, why do I have to answer him in the local? So let him die his mother...

Thanks for the confession.

I wasn't really expecting Mirion to assist me by sending the text of the petition, so I thanked him. My politeness landed on deaf ears.

I thank you even talking about?! moron I thee shit watering and I thank you - that if the war - bitch - do not wait for mercy 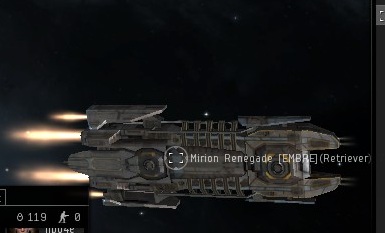 If the Russian GMs ever answered the petition, Mirion didn't tell me. It was back to business as usual, so the bumping continued.

Mirion was disappointed to learn that his petition was not the game-changer he hoped for.

so fuck off bitch are you from me and teach Russian - creature! 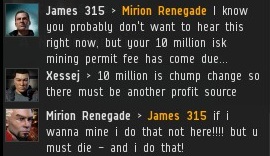 With no assistance from his GM allies, we were drifting dangerously toward a stalemate. 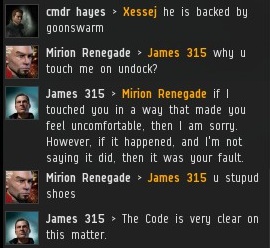 It's easy for two people from two different cultures to have entirely different perspectives. If there was any chance of our reaching an agreement, we would need to put our biases aside and accept the authority of the Code.

This was evidently the last straw. After all this time, Mirion finally set me negative. 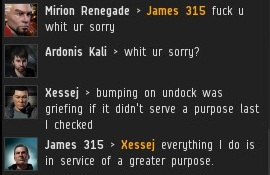 Whenever I enforce the Code, there are always looky-loos in local. Xessej started to backseat-space-lawyer Mirion by offering new ways that I might be in violation of the EULA. 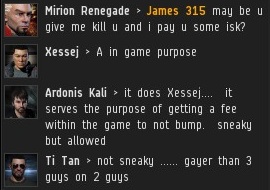 What followed was a heated debate about the legality of the New Order and its Code. The CCP issued a public statement on this matter months ago, but it remains one of the hottest topics in highsec. 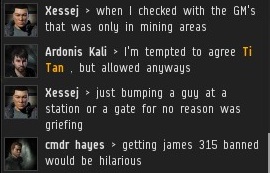 To paraphrase Winston Churchill, nothing in life is so exhilarating as to be petitioned without result. At least, the first few hundred times it happens. 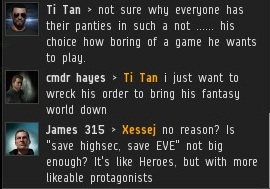 The fact is, the New Order is legal as can be. Mirion and I would need to fight this out to the bitter end. 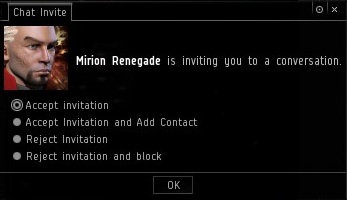 Suddenly, I received a convo invitation. Since when was Mirion in a talking mood? Had he received word that his petition was rejected? Regardless of its impetus, I would honour my commitment to diplomacy by accepting the invitation. 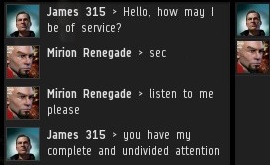